A World Cup Without Maradona: Fans Missing the Legend 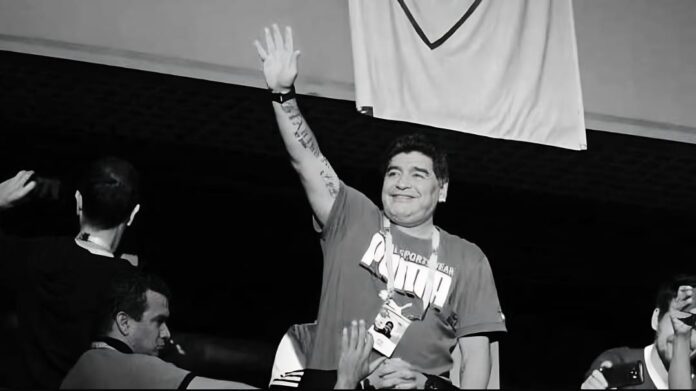 This is first FIFA World Cup without football legend Diego Maradona. Classic scenes Maradona used to do in world cups would not be reproduced in FIFA World Cup 2022 in Qatar. Really we are missing Diego Armando Maradona.

In 2018, as the 14th minute of Argentina’s World Cup group match against Nigeria approached, Messi brought down a laser-guided aerial through ball from Ever Banega with his thigh, and the second touch from Messi was almost instantaneous before a lethal right-footed shot curled away from the goalkeeper’s reach and into the net. Maradona’s dance with a Nigerian fan during the game drew notice. And he even required medical treatment during Argentina’s victory celebrations.

The stadium roared when Messi scored his first World Cup goal, but one man sitting in the stands had a spotlight almost as bright as Argentina’s number 10 on the field. It was none other than Diego Armando Maradona. He outstretched his arms and he thanked the heavens after Messi’s strike. Those classic scenes will not be reproduced in Qatar during the World Cup. Even he danced with a Nigerian fan during the game that drew notice. And he even required medical treatment during Argentina’s victory celebrations. 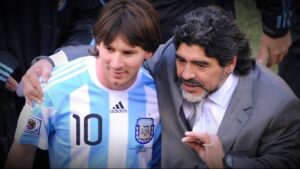 Football legend Diego Maradona’s “Hand of God” will be alive in the minds of the people as long as football will last. Some call it controversial goals while others say a football style.

England lost 2-1 to Argentina in the quarter-finals of the 1986 FIFA World Cup. Maradona scored the goal in that match to give Argentina a lead. The first goal for Argentina was the most infamous. Maradona scored with his hand instead of his head. He called this “Hand of God”.

Pele, the Brazilian legend, had a long feud with Maradona. The feud is over who was the better player and who shared the best player of the century award with the Argentine in 2000. Pele had written an emotional farewell to Maradona a month after the legend’s death.

“One day, in heaven, we will play together on the same team. And it will be the first time that I raise my fist in the air in triumph on the pitch without celebrating a goal. It will be because I can finally embrace you again,” Pele had written on a social media post.

Maradona will remain in hearts of footballs fans

Even decades after his retirement, Maradona lingered over Argentine football like a giant’s corpse. They hadn’t won the World Cup since Maradona led them to it in 1986 with a ‘hand of God’ and two miraculous feet that could only be stopped by the most heinous tackles. Maradona’s title-winning season exemplified how one player can galvanize an entire squad; nevertheless, his subsequent fall from favor had equally stolen the focus.

His accomplishments at the 1986 World Cup always remain in hearts of fans. Particularly those two goals against England.

People hold a particular place in their hearts for Maradona. For the majority of the children born in the 1990s, Maradona became a household name. Color posters strewn on the study table walls, stuck in by family members who would stay up late during the 1994 World Cup. They used to exclaim ‘that’s him, that’s Maradona’ to the kids, no matter how sleepy they were, are testaments to people’s love for Argentina’s number 10.

Maradona failed a drug test during a game against Nigeria in the 1994 World Cup. That was the football’s worst day in Argentina. As Argentina eventually dropped out of the World Cup, Maradona claimed responsibility. The story had been that he was a victim of circumstance.

Not only were Argentines left in tears, but fans in the whole world, were heartbroken. In his book, Football in Sun and Shadow, famous Uruguayan football writer Eduardo Galeano emphasized the love people felt for Maradona after his expulsion from the 1994 World Cup.

Maradona will remain as a true performer till the end

In some ways, a star like Maradona’s fall from favor made him more real and closer to the masses’ hearts. No other great footballer has come to be accepted in the same manner that Maradona has. When he died in 2020, tributes poured in, and they continue to do so.

We know that only few days left of his death anniversary. He died on November 25, 2022. He will remain as a true performer till the end, and his flaws were embraced alongside his genius.

Even while coaching Argentina in the 2010 World Cup, Maradona was chastised for his antics. Because the results did not live up to expectations, but he continued to make headlines after that. He had apparently already offended numerous Argentina officials when he arrived at the Argentina team hotel. The moments were before the World Cup 2014 final against Germany. Maradona, on the other hand, also had his own point of view.

Always the showman, never scared to be criticized. At the FIFA World Cup 2022 in Qatar, there will be no crazy cheers or theatrics from the great man. Maradona’s death left a vacancy in the football world. His presence at Qatar and the World Cups that follow will be much missed.