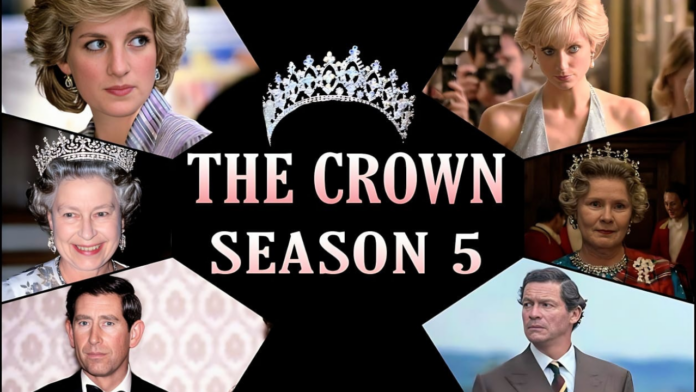 The Crown season 5 is already in the most interesting time in the history of the British royal family, or at least the time that people all over the world are most interested in.

Princess Diana was first introduced in Season 4. Actress Emma Corrin was chosen to play the “People’s Princess” in the early days of her relationship with Prince Charles and at their party-like fairytale wedding. national and got the attention of the whole world. The season also talked about the relationship between the queen and Margaret Thatcher, the story of the alleged secret cousins locked up in an asylum, and the IRA attack that killed a royal.

Many fans of the Netflix show said that anyone who hadn’t seen it yet could easily start with The Crown Season 5. Everything seems to point to the fact that the fifth season, which is one of the Golden Globe-nominated shows, will be even better than this one.

Reports say that The Crown season 5 will take place between the 1990s and the early 2000s. This means that it will show Charles and Diana’s marriage problems, the arrival of William and Harry, and the tragic accident in which Diana died.

We have to wait a few more months to find out more about The Crown Season 5 and see it, but we already know a few things about the show.

The first trailer shows the royal family in trouble, with a focus on the most difficult parts of Charles and Diana’s relationship, which leads to their breakup and Diana’s move out of the palace.

Who are The Crown’s new actors?

There is a new jump in time and with that we have new actors to play the queen, the prince and everyone involved in the story.

The first picture of Staunton has already been shown, and it confirms that we’ll be seeing an older queen this season because the show will jump forward in time.

Also, actor Dominic West has already been chosen to play Prince Charles instead of Josh O’Connor. The rumor that there will be two Dianas is the most interesting thing about the season. Elizabeth Debicki has already been confirmed for seasons 5 and 6, but it looks like Emma Corrin, who was a big hit in season 4, could show up in flashbacks.

Variety said that after a nationwide search, the show has already found its Prince William. Senan West, who is new to the show and is the real-life son of Dominic West, who plays Prince Charles this season, will play him. Senan will play Prince William for the first time in the last episode of the season 5.

The official pictures of Charles and Diana confirm that we’ll see older versions of both of them, which also means we’ll see more of the problems that ended up breaking up their relationship.

The show’s creator, Peter Morgan, told Deadline that all of the actors had already agreed to stay on for two seasons. “When we started talking about the storylines for Season 5, it was clear that we needed to go back to the original plan and do six seasons to do the story justice. To be clear, Series 6 won’t bring us closer to the present. Instead, it will just give us more time to talk about the same time period “he said.

Johnny Lee Miller, who was in Elementary and Trainspotting, is the newest member of the cast. He plays Prime Minister John Major, who was in charge for 7 years in the 1990s.

Who is Dodi Fayed?

Fayed was the Egyptian heir to a huge chain of department stores. He dated Princess Diana after she broke up with Prince Charles. Fayed also died in the same car crash in Paris that killed Diana.

Variety reported that Khalid Abdalla, who played Amir in “The Kite Runner,” has been cast as Dodi, who will play opposite Elizabeth Debicki in “Tenet” in the fifth season. Also, Salim Daw from “Oslo” will play Dodi’s billionaire father, Mohamed Al-Fayed, who used to own Harrods.

This proves that the series will look at Diana’s life after she left Buckingham, and it’s possible that we’ll also see the tragic moment she died, though neither of those things have been confirmed, nor have the actors who will play William and Harry.

In the summer of 1997, the princess started dating Dodi, a film producer who was known as a “playboy.” It was because of this relationship that the paparazzi started to follow her so much. When they both died in the same accident a few months later, the relationship was over.

What is The Crown Season 5 about?

Seasons 5 and 6 take place in the 1990s and early 2000s, so they’ll show some of the royal family’s most dramatic moments, like failed marriages, Princess Diana’s tragic death in 1997 (though it’s not clear if that will be in 5 or 6), and maybe even Princess Margaret’s death.

Peter Morgan told the Hollywood Reporter, “I feel much more comfortable writing about things that happened at least 20 years ago.” I have a 20-year rule in my head. That’s enough time and distance to really understand something, to figure out what it does, where it fits, and why it’s important. Things that seem very important today are often forgotten right away, while other things tend to stick around and prove to be very important and long-lasting in the long run. I don’t know where Prince Andrew, Meghan Markle, or Harry will fit into the grand scheme of things. We won’t find out, and he needs some time to stop acting like a reporter. So I don’t want to write about them, because if I did, it would become journalism right away. And there are already a lot of news stories about them. I think that to be a playwright, you need a different point of view and the chance to use metaphors.”

Elizabeth Debicki will play Princess Diana in the final two seasons of The Crown (Seasons 5 and 6). pic.twitter.com/Z3CjHuJ56B

Also, the book Diana: Her True Story, which came out in 1992 and caused a lot of trouble, will be talked about. RadioTimes says that it will show the explosive interview that Princess Diana gave to Martin Bashir on BBC One’s Panorama. In the interview, she talked about Prince Charles’s relationship with Camilla Parker-Bowles and said, “There were three of us in marriage.” It is also said that the tragic death of the Princess of Wales in 1997 will also be included.

When does The Crown Season 5 start?

The fifth season of The Crown will start filming sometime in 2021, but it won’t come out until 2022. This gives the show’s creators time to improve the scripts and make sure that every detail is up to date. one of the best Netflix shows at its best.