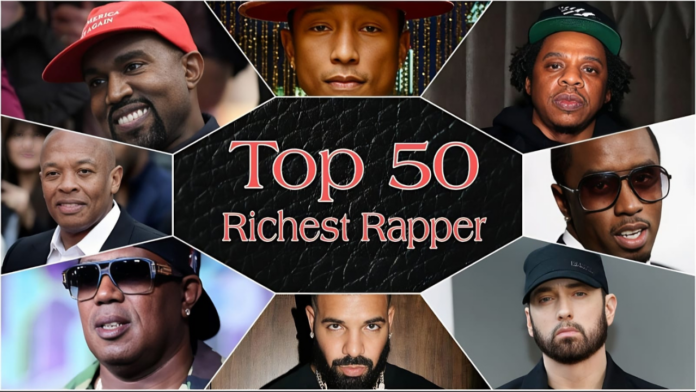 Kanye West is no longer on the list of the richest rapper in the world 2022 because of some recent and controversial things he did and said. Since many people stopped working with the musician and designer, Kanye West lost both his status as a billionaire and the top spot on the list of rappers.

So, after the Kanye West scandal, which is sure to change the music scene, we’ve put together a list of the 50 richest rapper in the world, based on data from WealthyGorilla and Forbes.com.

The American rapper and actor from Long Beach, California, got his start in music when Dr. Dre and his group NWA found him in 1992. Since Snoop Dogg was on his mentor’s first solo album, “The Chronic,” his own career has gone from strength to strength. Since then, Snoop Dogg has sold more than 23 million albums in the U.S. and more than 35 million albums around the world.

At age 9, Lil Wayne, whose real name is Dwayne Michael Carter Jr., became the youngest member of Cash Money Records. Since then, he’s sold millions of records and worked with a lot of well-known musicians.

The American rapper, songwriter, record producer, actor, and director started out with the hip-hop band CIA and later joined NWA. After he left the group in December 1989, he went on to have a successful solo music career. Since then, he has also been in many movies where he has shown his acting skills.

Aubrey Drake Graham is a Canadian rapper, singer, songwriter, actor, and record producer. Drake first became known as an actor on the teen TV show Degrassi: The Next Generation in the early 2000s, but now he is successful because of his music. Drake has won three Juno Awards and six BET Awards in addition to his Grammys.

Pharrell Williams is an artist who can do many things. He is a singer, songwriter, rapper, record producer, and movie producer. He also makes a lot of money from fashion and jewelry collaborations. Williams owns a company called I am OTHER that works in entertainment, music, fashion, and art. It is a kind of creative collective for all of Pharrell Williams’ projects, such as the Billionaire Boys Club and his most recent purchase, the Joopiter auction house.

Percy Robert Miller, also known as Master P, started his own record label early on. He is also the CEO of P. Miller Enterprises, which helps him with his work as a rapper, actor, businessman, author, record producer, and philanthropist. The former basketball player is now one of the richest rappers in the world thanks to his many business ventures.

Eminem is one of the most successful white hip-hop artists of all time, and in some hip-hop circles, he is the most influential person ever. Even though a lot of people stream music now, his albums still sell a lot of copies.

Dr. Dre, who was Eminem’s first teacher and mentor, is known as one of the best hip-hop producers of all time. Dr. Dre, whose real name is Andre Young, began his career in the 1980s with NWA. He later started his own business. He also started the Beats by Dr. Dre series of headphones, which Apple bought for $3 billion a few years ago. It’s no surprise that he’s the third among the 50 richest rapper in the world. world, with a big lead over fourth place.

Sean Combs does almost everything: he raps, acts, produces, writes songs, and runs his own business. Combs has become one of the 50 richest rappers in the world and is now known by his stage name, “Diddy.” He was even number one for a long time, until other hip-hop artists copied his business ideas outside of music and also did well.

Jay-Z is the wealthiest of the top 10 richest rapper in the world 2022. This American artist and businessman from Brooklyn, New York, has made most of his money by making smart investments in fashion brands, record labels, and nightclubs. Jay-Z was also the first rapper to have a net worth of more than $1 billion.

He was the richest hip-hop artist in the world until April 2020, when Kanye West passed him. But his fame only lasted for two years, so after his last mistakes, almost all the partners left the criticized ex-husband of Kim Kardashian, which led to a big drop in his wealth. So, in the fall of 2022, Jay-Z could take the throne again as one of the richest rapper in the world.

You can find below another list of 50 top richest rappers in the world 2022, according to The Richest.