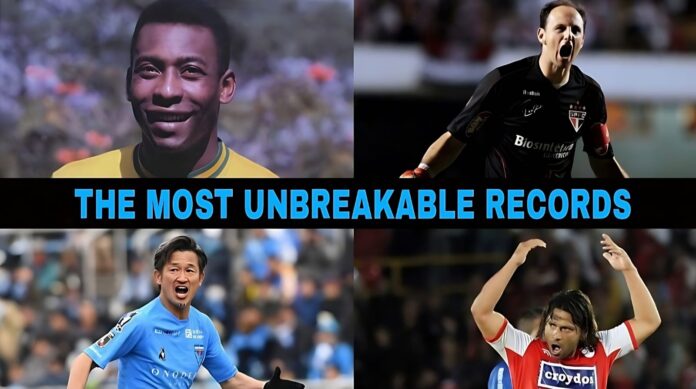 If soccer fans feel interested in FIFA World Cup 2022, they can find here 15 top most unbreakable record in football history. Over the years, many memorable records have been created. Football has developed rapidly over the years thanks to the millions of people who follow it throughout the world. There are also numerous records to be broken in soccer thanks to the countless metrics, laws, and regulations that surround the games. Records are set not simply for winning championships or scoring goals, but also for a variety of other soccer-related accomplishments.

The extraordinary breadth of the sport enables players other than the top scorers, such as defenders, goalkeepers, and midfielders, to establish some illustrious records that will help them live on in history. While certain records have embarrassed the players who hold them, the majority of soccer record-holders are very proud of their accomplishments, which helped cement their place in history. Even though so many soccer records have been broken throughout the years, there are some that are probably not going to be broken any time soon.

As with any other sport, soccer has produced many unbreakable record in football throughout its history. Here are 25 records in particular that are certain to never be surpassed.

1. Most Goals by a Goalkeeper

Most goalkeepers are one-dimensional athletes. Keep the ball out of the net is their one and only responsibility on the field—at least the only one that warrants close examination. A Brazilian goalkeeper named Ceni played for Sao Paulo. He was a superb goalie who even got to play for his nation in two World Cups. Additionally, he was incredibly skilled at set-pieces.

Ceni scored 131 goals during the course of his career, which lasted 2.5 decades. That is over 60 goals more than Jose Luis Chilavert. Luis is the second-most prolific goalkeeper in history. Ryan Giggs, an aggressive player, has only scored 111 goals since Ceni started taking set pieces for his team.

After retiring, Ceni took over as manager of Sao Paulo. His record may yet improve, but no matter what he does in the future, he will always be remembered as the goalkeeper with the most goals scored.

Pele is typically given credit for this record by football fans, but he is not even second on the list. Josef Bican, who is a less well-known athlete, at present holds the record. The longer careers of players were made possible by the then-more-lax football schedule. Currently, it is practically hard for football players to last 1,000 games.

Even if they were to play in close to 1,000 games, like Giggs and Paolo Maldini. It would be hard to continue scoring at the incredible rate of 1.6 goals per game like Bican did.

Real Madrid dominated Europe during the 1950s and 1960s, winning the European Cup five times in a row between 1955 and 1960. Real Madrid rose to the top of the list of the best clubs in the world thanks to this amazing accomplishment.

A team has never won this important European title twice in a row, and winning the Champions League today is quite difficult.

4. Highest attendance at a football game

With an estimated 210,000 fans in attendance, the 1950 World Cup Final between Brazil and Uruguay at the Maracana Stadium now retains the record for the most spectators ever.

Every game between Brazil and Uruguay at the time was highly anticipated because the two nations were fierce rivals in world football. Despite the fact that only 173,850 tickets were sold, there were so many people on the Maracana pitch that the possibility of a disruption significantly jeopardized the game. Football officials enhanced stadium security after 1950 to guarantee great safety for every game.

5. The match having the highest score

The game between AS Adema-O l’Emyrne, which took place on October 31, 2002, as part of the national championship of Madagascar, was won by the host team by a score of 149-0. The Guinness Book of Records acknowledged this game as having the most goals scored in a football game in the history of the game. In a super-sized encounter in Madagascar, AS Adema, a sizable club with its headquarters in Antananarivo, defeated Stade Olympique de l’Emyrne (SOE).

The squad, however, opted to lose themselves in protest after a series of unexplained decisions worked against Emmy to give Adema the championship. With 149 goals, they shot into their own goal. They scored goals at a rate of one every 40 seconds.

6. The record for fewest scores in the Premier League

Derby County set this depressing record during the 2007–2008 campaign. Derby County only managed one goal against Newcastle after 38 rounds, and they suffered 29 losses, also a record in the UK.

Derby County scored 20 goals and allowed their opponents to score 89, finishing the season with 11 points and the last spot in the standings.

7. The Youngest Player to Debut in A Professional Match

In recent years, numerous kids have made their professional soccer debuts due to how fit today’s soccer players tend to get at a young age, yet a player would need to outperform Mauricio Baldivieso to surpass his record.

As the youngest player to do so in a competitive soccer match, the Bolivian soccer player made his professional debut at the age of 12 for club Aurora. Since then, he has been playing in Bolivia and working to become a more recognizable reputation in the soccer world. Baldivieso still proudly retains a record that will keep his name inscribed into the history books for all time, even though he may not have achieved the level of renown he desired.

8. The Senior Football Player in the League

On November 12, 2015, the 48-year-old player Kazuyoshi Miura’s contract with Yokohama FC, a team in the Japan Professional Football League’s second level (J-league 2), was renewed, shocking everyone. Even more unexpectedly, Miura excels as a striker.

One of the most well-known players that Japanese football has ever trained is Kazuyoshi Miura, also known as Kazu, who was born on February 26, 1967. Prior to the 1986 debut of the renowned Santos Club, he and his family relocated to Brazil when he was 15 years old to pursue a career in football.

To surpass Billy Meredith’s record of being the oldest player to ever score in a professional competition, Miura will need to put up more effort. In 1924, at the age of 49, this famous Man City player scored a goal against Brighton in the FA Cup semifinals! He set a record for the oldest player to score for a national football team four years ago when he was 45.

9. Scoring most goals in a year

With 91 goals, Lionel Messi has just broken the all-time record for goals scored in a calendar year, and this current football story is undoubtedly the most talked about.

When the Zambia Football Federation displayed Godfrey Chitalu’s statistics, they disagreed with this record, despite the fact that he scored 107 goals with the Kabwe Warriors in 1972. If you wish to beat him, you’ll need to score 1,319 goals in a single year.

10. Most Red Cards in a Player’s Career

Because of the violence involved, the game of soccer can occasionally become a little hot, and occasionally something extremely impulsive forces the officials to brandish a red card. No player wants to get sent off and lose a member of their squad, yet there are certain players who are quite violent and have received many red cards over their careers.

However, for soccer star Gerardo Bedoya, who holds the record for receiving the most red cards in the sport’s history with 46, getting sent off was nothing new. Bedoya quickly earned the moniker “madman” for his propensity to lose control under pressure and get sent off.

There are other 5 most soccer records in football history: