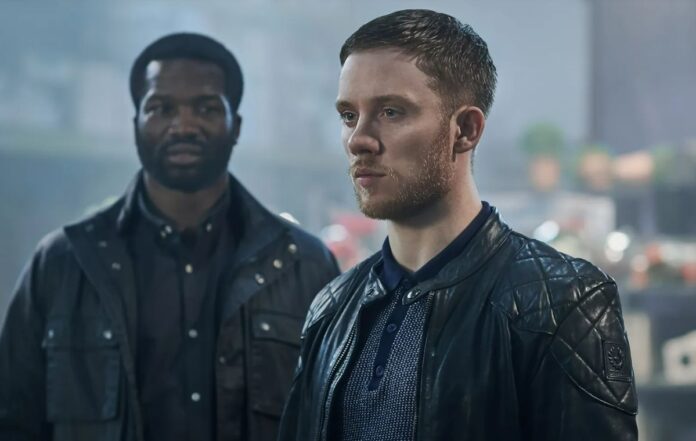 Gangs of London is not a sequel to Peaky Blinders, but sometimes it feels like it could be.

The second season of the show just started on Lionsgate+. It’s a story about crime families, power, intrigue, betrayal, and violence, and it all starts with a brutal murder that sets off chaos.

In the first episode of Season 1, a powerful man is killed, and his son, Sean Wallace, takes over as leader of a powerful crime family in the heart of London. Unlike Peaky Blinders, this story takes place in the present, and Sean is also trying to figure out which of the rival gangs was behind his death.

Sean Wallace isn’t as tough as Tommy Shelby, but he also has to lead, and in that position, he has to be brutal if he wants to stay alive. On the other hand, Gangs of London also has a character named Elliot who becomes a big problem for all the gangs and starts working as an undercover agent to destroy them.

The British series was nominated for an Emmy and is one of those stories that seems to know very well what it takes to make a good series that everyone wants to watch.

Why do you have to see Gangs of London?

Gangs of London has many of the best parts of the Peaky Blinders story. It also takes things from the real world and throws them into the criminal world to show how complicated it is and how complicated things are for the people involved. picked up.

Thomas Benski, who won a BAFTA, and Corin Hardy, who made “The Nun” and “The Hallow,” talked to us about the Season 2 premiere.

“Season 1 was mostly about the murder mystery and finding out who killed Sean Wallace’s father. We followed the investigation from Sean’s and Elliot’s points of view, and we showed how it grew and how it tore the families apart. We didn’t want to do that again in season 2, which comes a year after the first season ended. Instead, we looked at the new world order in London, where gangs are trying to take over and The Investor is looking for a new leader and putting the military in charge of the gangs that are no longer playing their game.

Also, this second season is very focused on the character of Elliot (Sope Dirisu), so we are told: “Meanwhile, Elliot is in a hurry. He works for The Ivestor, who is controlling and manipulating them so that they do his dirty business, and he is called to London to help in this situation. We wanted to put the audience right in the middle of the crisis and then bring in the family members to show a balance and how hard it is for families to live in this criminal world.

“Elliot is the closest to us, he is the moral center, and he is in the right place. He has also found us looking into how he approaches the edge. It has been almost like a Greek myth, with morals and conflicts being played with. He is a fascinating character that you can learn about slowly because there is so much to him. Season 2 is a great journey for him, and we see him change and surprise us,” they say.

What’s interesting about Elliot is that he wants to be a hero and keep his morals high, but his mission keeps taking him in the opposite direction. “Every character’s journey is different, and so is his. In Season 1, he was a soldier who went undercover to infiltrate and investigate a crime family. He ends up on the other side, working for the people he wanted to destroy, and can’t find a way out. He’s on a mission to get through this. The creators say, “That has to do with his soul and his humanity, and we want to see how long he can keep his soul in this world.”

Another thing that Gangs of London got right।It is a must-see series because it looks like a movie and everything, especially the violence, is big and epic. Thomas Benski says, “The genre of the show and the point of view we have make it so that everyone is treated the same. They are all criminals, but they do it for different reasons. Some do it for their families, others for a greater cause, and others want money and power. Violence is a part of this lifestyle, and we had to go there to make the world of Gangs of London. But it’s a movie, so the violence is based on the characters’ situations and stories. It should feel shocking, iconic, and like a movie. We spent many months putting together these action and violence scenes.

Also, the second season has a lot more moral problems, alliances, and conflicts. Hardy says, “Some characters have to betray even their own loved ones and work with their enemies.”