Deadly Halloween Crowd Crush in Seoul: How Could This Happen? 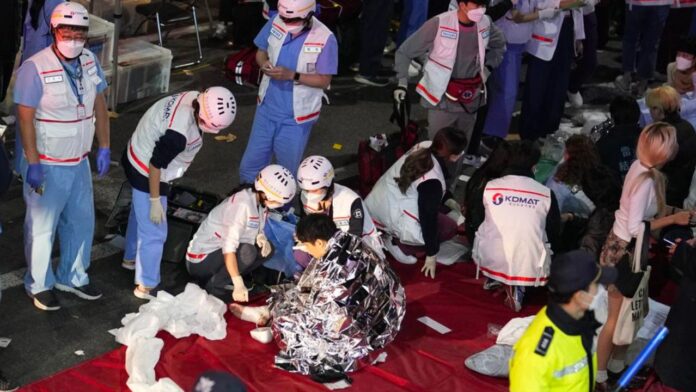 South Korea is hunting for answers after Halloween festivities in the capital Seoul turned into one of the nation’s greatest disasters, with authorities proclaiming a national mourning period as they examine how a chaotic crush resulted in at least 151 deaths.

Tens of thousands of costumed partygoers, primarily teenagers and young adults, flocked to the renowned nightlife district Itaewon for South Korea’s first Halloween celebration since the removal of Covid restrictions such as crowd limits and face mask regulations.

Photos and videos on social media depicted enormous crowds crowded into a tight alleyway as the festivities deteriorated into pandemonium. According to witnesses, the partygoers were crowded so tightly together that it was difficult to move or even breathe.

On Sunday, the turmoil of Saturday was replaced by shock and mourning across the nation. Many victims’ families have congregated at a neighboring location in Itaewon, where officials are racing to identify bodies while gathering the lists of the dead and missing.

In a Sunday briefing, Minister of Interior and Safety Lee Sang-min stated that more than 90 percent of those slain have been identified. He noted that approximately ten individuals cannot be identified since some are under the age of 17 – too young to carry a national identification card – and others are foreigners.

But many remain missing, with family calling hospitals and visiting morgues in a state of anxiety. Sunday at 2 p.m. local time, Seoul officials had received over 3,580 reports of missing persons, according to the city government.

And despite the fact that the government has initiated an investigation and vowed new steps to avoid similar accidents from occurring in the future, doubts are emerging as to how such a catastrophe could have possibly occurred.

Cho, the 23-year-old survivor, stated that she did not observe any police or officials attempting to regulate the crowd before to the crush. Even after their later nighttime arrival, the chaos and terror remained, media reported.

At 10:24 p.m. in Seoul, authorities got the first reports of persons being “buried” in crowds (9:24 a.m. ET). As the news emerged, Yonhap said that some individuals had experienced “cardiac arrest,” while others complained “breathing difficulties.”

Officials reported that there were no gas leaks or fires at the site.

Lee Sang-min, Seoul’s interior and safety minister, stated on Sunday that “a significant number of police and security officers” had been dispatched to another area of Seoul on Saturday to quell protests.

In Itaewon, he said, the throng had not been especially huge, therefore a “regular” number of security personnel had been deployed.

As the crisis progressed, however, it inspired a massive response. On Saturday night, more than 1,700 emergency response personnel were summoned, including 517 firefighters, 1,100 police officers, and approximately 70 government employees.

Social media videos revealed that police had cordoned off an area where partygoers were administering chest compressions to partygoers on the ground while they awaited medical assistance. Others showed Halloween-costumed individuals laying on the pavement and in stretchers while first responders administered help and ambulances lined up to transport the injured.

In his address to the nation, he declared a national time of mourning “until the accident is resolved.” Prime Minister Han Duck-soo later announced that the period of mourning would expire on November 5 at midnight.

Yoon stated that a catastrophe that should not have occurred occurred in the midst of Seoul on Halloween night. “I grieve for those who perished in a tragic accident and wish the injured a speedy recovery.”

In addition, he stated that the disaster will be investigated and preventative steps would be implemented to prevent future occurrences.