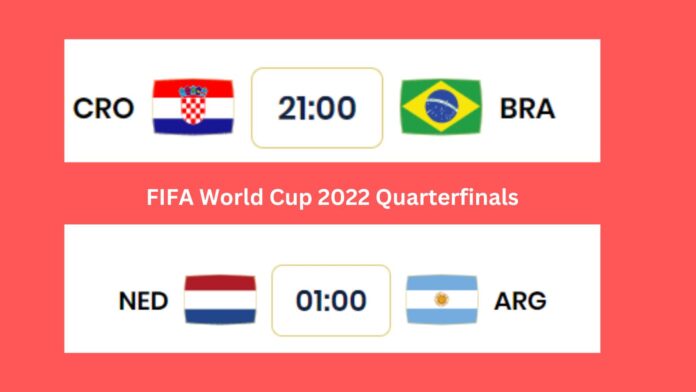 On Friday, the quarterfinals of the FIFA World Cup 2022 will begin with two games between South America and Europe. Neymar and Lionel Messi will try to be their teams’ best players once again.

The most important part of the FIFA World Cup 2022 in Qatar has begun. The Round of 16 games had a lot of drama and saw former World Champions go home.

Spain was knocked out of the competition by a team from Morocco that was fast and strong. Morocco is still doing well in the competition. Portugal and Brazil won by a lot against Switzerland and South Korea, respectively. The Netherlands, France, and England also won easily.

Australia made it hard for Argentina to get the win, and Lionel Messi once again stole the show. Japan was the tournament’s “giant killer,” but Croatia beat them in a memorable penalty shootout where the best player was the goalkeeper from Croatia, Dominik Livakovi.

Now that the group stage is over, it’s time for the quarterfinals, which should be some of the most exciting games in World Cup history. The fun of the last 8 games will start on Friday when South America and Europe play each other.

Argentina vs The Netherlands

Will the Selecao Dance their way Into the Semi-Finals?

Brazil was just so classy in their Round of 16 matches against South Korea. The match was pretty much over after the first half when the Selecao scored four goals against the Asian giants. This helped them get over the disappointment of losing to Cameroon in their final group game.

At the end of the day in the Round of 16, the players’ dances may have gotten all the attention, but it looks like Tite’s team has switched gears for the rest of the tournament.

Neymar’s return has also been a big help for Brazil, where players like Richarlison, Vinicius Jr., and Casemiro are also playing well.

They will face another tough opponent in Luka Modric and Croatia. The runners-up in the 2018 World Cup have been tough throughout the tournament, and they will be ready for a big fight on Friday.

The second game of the night is hard to predict because Lionel Messi and Argentina are playing against the Netherlands, who haven’t lost yet and have been amazing all tournament.

In the Round of 16, Argentina needed Messi’s magic again to beat Australia, but the Socceroos’ pressure was absorbed by Argentina’s defense.

The Netherlands was very good at scoring against the United States, but coach Louis van Gaal wasn’t happy with how his team played because he thought they lost a lot of possession of the ball.

Keeping control of the ball could be one of the deciding factors in this game, as Messi tries to beat the Dutch team and move closer to his goal of winning the World Cup.