Argentina vs Netherlands Head to Head, Match Predictions and Facts

Do you know which team is ahead Argentina vs Netherlands head to head? Argentina and the Netherlands will face off in the quarterfinals of the FIFA World Cup 2022 in Qatar on Friday (9 December) in a matchup between two of the sport’s most dominant nations.

In the five games they’ve played against each other at the World Cup, these two football powerhouses have made some of the most memorable moments in the tournament’s history. They’ve won two games each, and one game ended in a tie.

The stakes will be high again when the two biggest rivals play against each other for a spot in the semi-finals of the FIFA World Cup 2022 and to cement their place in history.

Even though the Netherlands made it to the finals three times, they never won the title. on the other hand, the Argentina match is one of only eight countries to have ever held the FIFA World Cup Trophy.

The South Americans have won the World Cup of football twice. In 1978, they beat the Dutch 3-1 in the final, which was held in their own country. In 1986, they beat West Germany 3-2. This gave them their second title.

Both the Netherlands and Argentina had some early tournament nerves at the 2022 World Cup in Qatar, but they were able to calm down and win their groups to get to the next round. Now we could see Argentina vs Netherlands head to head match again.

Argentina vs Netherlands Head to Head: Finding their Rhythm in 2022

The Netherlands started their 2022 World Cup campaign with a 2-0 win over Senegal, the champions of Africa. They then played Ecuador to a 1-1 draw, which was a very tense game. They got back on track by beating hosts Qatar 2-0 in their last round-robin game.

The Dutch then beat the Americans 3-1 in their round of 16 matches, making it 19 games in a row that they haven’t lost.

Saudi Arabia beat Argentina 2-1 in the first game of the World Cup, which was one of the biggest upsets in World Cup history.

Argentina has stumbled a bit in this tournament, but Lionel Messi’s world-class skills can get them out of any jam. In the meantime, the Netherlands has looked very good on both defense and offense. This will definitely be the hardest game for both teams, and we think that neither team will be able to beat the other easily in Argentina vs Netherlands Head to Head game. 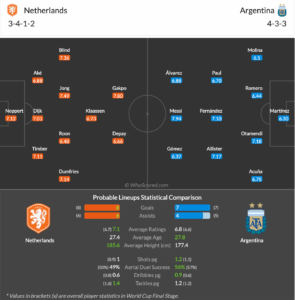 Argentina vs Netherlands Head to Head: 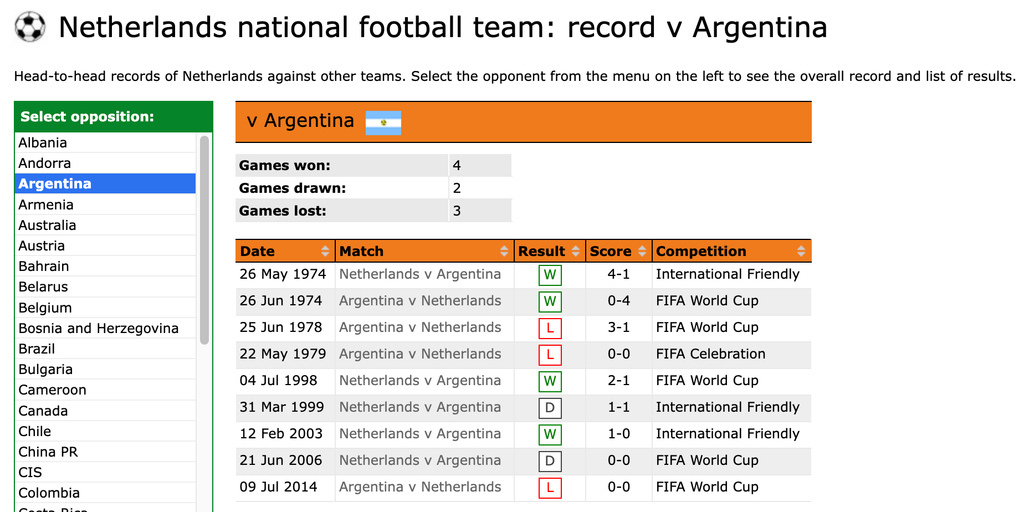 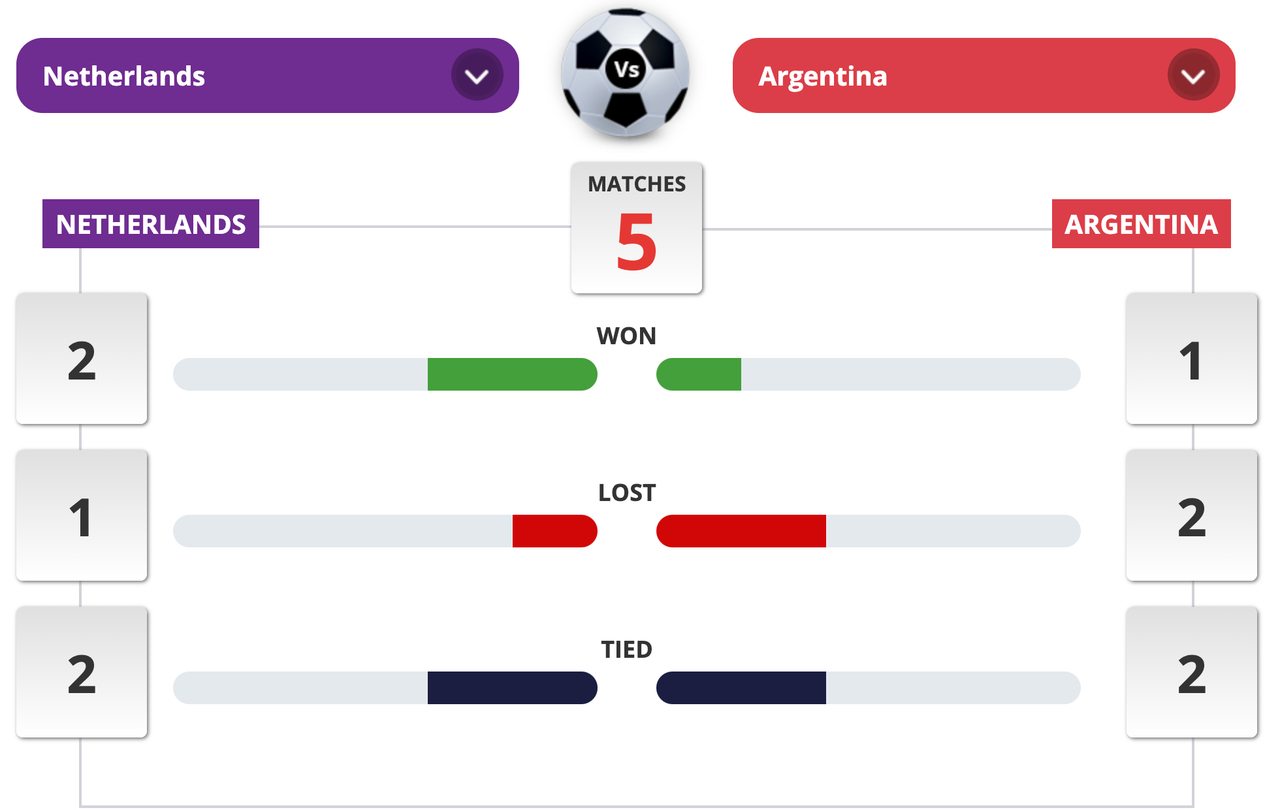 Argentina vs Netherlands Head to Head in FIFA World Cup

Lionel Messi celebrated his 1000th career appearance by scoring his 789th career goal. This was the 94th goal-scored in Argentina match.

Julian Alvarez is only the sixth player in World Cup history to score in his first two starts for Argentina. Hernan Crespo was the final player in 2006 to score a goal.

Lionel Messi has scored the opening goal in six World Cup games, tied for the most in the tournament with Christian Vieri, David Villa, and Ronaldo.

Argentina is the second team to advance to the quarterfinals after losing their opening match. Spain 2010 was the last team to accomplish this feat, and they went on to win the World Cup.

Argentina’s participation in the World Cup Finals. 18 – Played 85 matches, winning 46, drawing 15, and losing 24. (Knockout matches which were decided on penalty shoot-out – included in the draw) Updated until the match against Australia in the Round of 16.

In the Round of 16, Memphis Depay scored his 43rd goal for the Netherlands. He is now the second-highest scorer in his country. He trails only Robin van Persie (50) in the rankings.

Denzel Dumfries became only the third Dutch player in World Cup history to contribute to three or more goals in a single match. The other two are Johan Cruff (1974) and Rob Rensenbrink (1978).

Coached by Louis van Gaal, the Netherlands has never lost a World Cup match. – Eleven games have been played, with eight victories and three ties.

Netherlands’ participation in the World Cup Finals. 11 – Played 54 matches, won 30, tied 13, and lost 11. (Knockout matches which were decided on penalty shoot-out – included in the draw) Updated until the Round of 16 matches against the United States.

Angel Di Maria, a veteran winger, is Argentina’s only health concern. The player started for Argentina when he was available, so they will be hoping he can come back after not being able to play against Australia in the round of 16.

The Netherlands has had a pretty healthy team for most of the World Cup, and all 26 players are healthy enough to play against Argentina. It will be interesting to see where key player Cody Gakpo is put by Louis Van Gaal.

Who could Argentina Play in the Semi-Finals?

If Argentina beats the Netherlands, they will play the winner of the game between Brazil and Croatia, which will be a very tough match. Many people will be hoping that Brazil advances because a game between them and Argentina would not only have a lot of goals but also a lot of big hits because of the rivalry between the two South American countries.

When does the Netherlands Play Argentina?

On Friday, December 9, 2022, in the quarterfinals of the World Cup, the Netherlands will play Argentina. For people in the UK, this game starts at 7 PM GMT.

Will Lionel Messi start against the Netherlands?

Messi is in great shape, and he’s also done a lot of good things at this tournament. The Argentinian will definitely start this important game against the Netherlands, and he is the key to helping Argentina win this game.

Since this is probably his last World Cup, football fans want to watch every second of every game he plays.

How to watch Argentina vs Netherlands?

The game between Argentina and Netherlands will be shown live on BBC One and BBC One HD, which are both available for free. Coverage will start around 6 PM GMT and will include interviews, analysis, and much more.

This match will also be available to watch live on BBC iPlayer, which is a live-streaming service. All you have to do is sign up for an account, and then you can watch all the football.

Now we are waiting to watch the highly anticipated Argentina vs Netherlands head to head match. Stay with us for more updates.