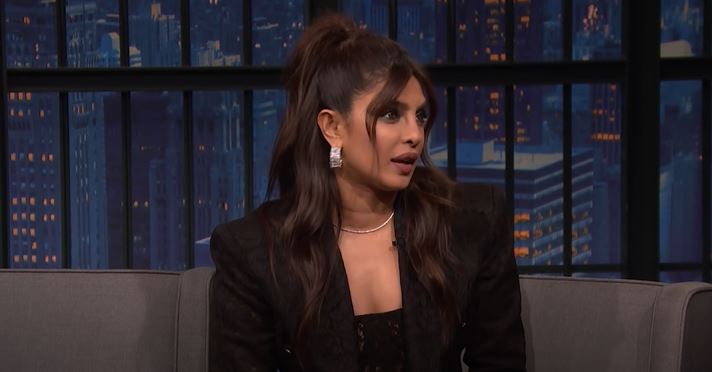 Priyanka Chopra appeared on Seth Meyers’ talk program on Friday. The actor, who is presently promoting The Matrix Resurrections, asked Seth the same question she was asked during the Miss India pageant 21 years ago.

On their Twitter account, Late Night with Seth Meyers uploaded a clip from the broadcast. “I’m going to ask you my question, the one I was asked at the Miss India contest,” Priyanka said in the video. Let’s see what you have to say.” “My query was very Matrix in nature, blue pill or red pill, but it was ‘If ignorance is bliss, why to seek knowledge?” she continued.

“Well, that’s a beautiful question,” Seth responds amusingly. “Great technique of buying time,” Priyanka interrupts. “And I don’t want you to believe I’m buying time with this answer because I appreciate your time,” Seth continues. And I understand that this is a timed response and that a bell will ring at some point, and I won’t have to go where I was going. Isn’t it true, Priyanka, that I can be bailed out?” “No, no, no,” Priyanka responds.

Priyanka Chopra reveals her Matrix Resurrections co-star Jada Pinkett Smith held her hand while she cried: ‘It was terrible,’ she says.

“Priyanka, I can’t,” Seth continues. “Millions are watching,” Priyanka reminds him. “On behalf of all of you, I believe you, too, have forgotten the question,” Seth continues. “Concentric Circles,” Priyanka interjects, laughing. And Seth Meyers is Miss America.” The crowd erupts in applause as Seth says, “Oh my goodness.” “Thank you very much.”

The Matrix Resurrections, Priyanka’s upcoming film, will be released in theaters and on HBO Max on December 22. It is the fourth installment in the Matrix series. Keanu Reeves reprises his role as Neo 18 years after The Matrix Reloaded and The Matrix Revolutions, both of which were released in 2003.