The most often requested feature on Twitter to far has been an edit button, and as of today, the business is giving users what they’ve been asking for.

Twitter today announced a new tool to edit tweets in the midst of several major crises as well as a high-profile legal dispute over its future ownership. The functionality is now being tested internally, and later this month, Twitter Blue subscribers will be able to use Edit Tweet.

Only Australia, Canada, New Zealand, and the United States presently offer Twitter Blue; the company hasn’t yet revealed its plans to expand the subscription service to additional nations, much less how it intends to make the Edit Tweet function available to the remaining 237.8 million free users. 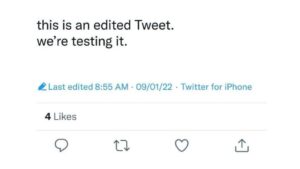 People criticized the firm in July for raising the cost of Twitter Blue subscriptions; perhaps the addition of the Edit Tweet tool will make up for that increase.

The basic guidelines for users of the Edit Tweet feature are as follows: The updated tweet will appear with a label displaying the timestamp of modification, and eligible users will have a window of 30 minutes to fix their tweets. Readers of the tweet can tap the label to observe the tweet’s editing history.

If you’ve been keeping up with Twitter and the development of the editing feature, you’ll notice that this implementation is mostly consistent with what app sleuths discovered about the functionality after Twitter formally revealed it was working on an edit button in April. Last month, app researchers drew attention to the potential behavior of modified tweets when they are integrated on other websites. The company said that embedded tweets will remain unchanged online even if they were later adjusted to maintain the integrity of the original narrative.

this is happening and you'll be okay

When Twitter responds to our request for clarification, we’ll revise this article accordingly. Notably, the social media network currently provides Twitter Blue subscribers with a “Undo Tweet” option that allows users a 30-second opportunity to stop broadcasting a tweet if they discover any errors. After introducing the Edit Tweet button, the firm claimed that it will keep providing this option.

The introduction of an edit button causes some obvious gray patches to appear. Starting with the obvious, it might influence how Twitter is used by the media. These days, news reports frequently employ tweets as their primary source, whether they come from businesses, politicians, artists, businesspeople, or just regular people. By making such tweets editable, publishers will be required to monitor each tweet to see if its content has been altered.

Another unanswered concern is how authorities would assess a tweet that has been modified for content that might be illegal in a particular nation. The Edit Tweet function, according to the firm, “gives consumers a brief period of time to edit things like typos, add missed tags, and more,” according to a blog post. There are no limitations on what you can amend in a tweet, though, or what effects such edits might have.

The firm stated in a blog post that it hoped to make Tweeting simpler and more approachable with Edit Tweet by offering users more freedom and control over how they expressed themselves and contributed to the numerous conversations taking place on Twitter.