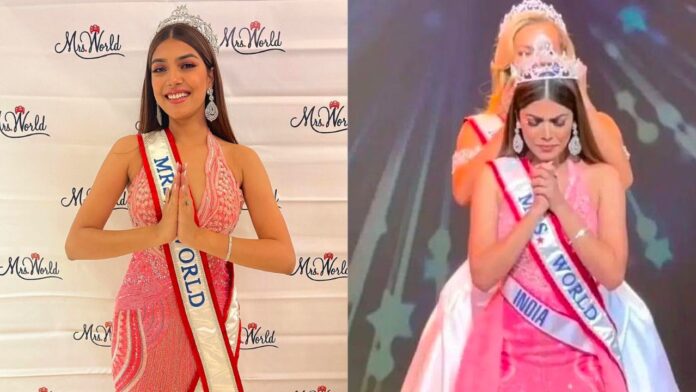 Sargam Kaushal, who was from India, was chosen as Mrs. World on December 18, 2022, in Las Vegas. After 21 years, Mrs. Kaushal beat competitors from 63 countries to bring the crown back to India.

The organizers of the Mrs. India pageant wrote on Instagram, “The long wait is over. After 21 years, we got the title back!” Sargam Kaushal, who lives in Jammu and Kashmir, also shared a video in which she talked about how happy she was to win the title.

The Greater Kashmir website says that Sargam Koushal, who is 32 years old, is a model, a painter, and a content writer. She has a bachelor’s degree in education and a master’s degree in English literature. Koushal’s dad used to work as a banker. She thanked him for encouraging her to follow her dreams.

Koushal lives in Mumbai with her Navy officer husband. During the Mrs. India pageant, she said that her marriage was the most “beautiful and satisfying” part of her life. She told him “I met a fantastic man”. “We help each other grow and change. He’s been there for me “.

Mrs. World started in 1984 and grew out of the Mrs. America competition. This event used to be called “Mrs. Woman of the World.” The name Mrs. World wasn’t given until 1988.

Over the years, Mrs. World has been held in more than 80 countries, but the United States has won the most times. Only once, in 2001, did India win the title of Mrs. World. The important title went to actress Aditi Govitrikar. Dr. Govitrikar is a judge for Mrs. India Inc. 2022-23 at the moment.