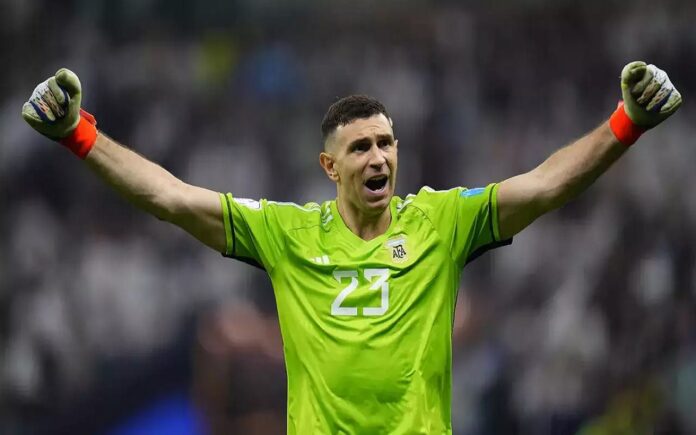 The French FA has filed an official complaint about how Emiliano Martinez, the goalkeeper for Argentina, keeps taunting Kylian Mbappe.

After his team beat France on penalties after a dramatic 3-3 draw in Sunday’s World Cup final, the Aston Villa goalkeeper took several shots at Mbappe.

Martinez first asked for “a moment of silence” for Mbappe when the team was celebrating in the locker room after the game in Qatar. He did the same thing when Argentina came back to Buenos Aires for a victory parade.

Martinez walked around with a doll with Mbappe’s face taped on it, even though he was standing next to Mbappe’s teammate at Paris St. Germain, Lionel Messi.

Martinez has been heavily criticised, and the President of the French FA, Noel Le Graet, has written a letter to his Argentine counterpart, Claudio Tapia, to complain. Martinez also shocked people when he made a lewd gesture with the Golden Glove trophy when he was given it after the final.

He told Ouest-France, “I wrote to my counterpart in the Argentine Federation.” “In the context of a sports competition, I find these excesses strange and hard to understand.

“This is way too much. Mbappé has been a model player.”

The French Sports Minister has also said that they might file an official complaint about what Martinez did.

Why is Messi letting Martinez mock & humiliate Mbappe like this? They’re teammates at PSG, just so weird & graceless. pic.twitter.com/btx0KDbs2J

Amelie Oudea-Castera told RTL Radio, “I haven’t ruled out talking about this with my counterpart.” “I think this is all pretty sad,” she said.

Martinez was one of Argentina’s heroes because he made a great save on Randal Kolo Muani in the last seconds of extra time and then did funny things during the penalty shootout.

Martinez stopped Kingsley Coman’s shot, and then he tried to scare Aurelien Tchouameni by throwing the ball away as he got close to the penalty spot and using other intimidating moves.

Argentina won the shootout 4–2, giving them their first World Cup title since 1986 and causing wild celebrations back home.