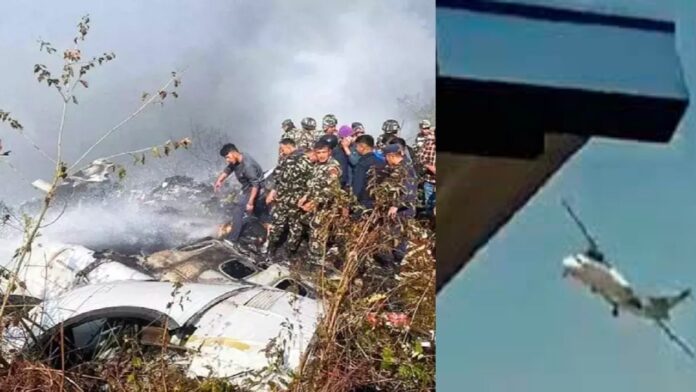 Sunday morning, a passenger plane crashed in Nepal, killing at least 66 people.When it crashed, the plane was on its way from the capital, Kathmandu, to Pokhara. About 200 km (124 miles) west of Kathmandu is the busy tourist town of Pokhara.

Nepal’s Yeti Airlines flew a twin-engine ATR 72 plane with 72 people on board, including four crew members, said a spokesman for the company, Sudarshan Bartaula.

Nepal PM Pushpa Kamal Dahal ‘Prachanda’, along with Home Minister Rabi Lamichhane to arrive in Pokhara today, in wake of the aircraft crash at Pokhara airport.

A five-member committee has been formed to investigate the reasons for the crash.

Visuals from the spot. pic.twitter.com/nOi5mTh7cF

He wrote on Twitter, “I am very saddened by the sad and tragic accident of Yeti Airlines ANC ATR 72, which was carrying people from Kathmandu to Pokhara.”

“I sincerely ask the security staff, all government agencies in Nepal, and the general public to start a rescue that works.”

The government has put together a group to look into the crash.

Read More: Most Powerful Passport in the World

Local TV showed rescue workers and crowds of people gathered around the plane’s wreckage as thick black smoke rose from the crash site.

An eyewitness said he saw the plane spin wildly in the air as it tried to land. The plane then fell nose-first to the left and crashed into the gorge.

“After the crash, the plane caught fire. “Smoke was everywhere,” the witness said.

#WATCH | A passenger aircraft crashed at Pokhara International Airport in Nepal today. 68 passengers and four crew members were onboard at the time of crash. Details awaited. pic.twitter.com/DBDbTtTxNc

The plane called the airport from Seti Gorge at 10:50 (05:05 GMT), according to a statement from the aviation authority. “Then it went down.”

“Half of the plane is on the hillside,” a local man named Arun Tamu told Reuters when he got to the crash site minutes after the plane went down.

“The other half fell into the Seti river’s gorge.”

Officials told Al Jazeera that the large crowd at the crash site is making it hard to do the rescue work that is still going on. They have been asked to leave by the rescue teams.

Ramyata Limbu told Al Jazeera from Kathmandu that people in Pokhara said the weather and visibility were “good” at the time of the crash.

“So it’s shocking and unexpected,” Limbu said. “People who saw the plane before it crashed into a gorge near the airport said it was having trouble.”

According to Aviation Safety Network, this is Nepal’s deadliest crash since March 2018, when a US-Bangla Dash 8 turboprop flight from Dhaka crashed while landing in Kathmandu, killing 51 of the 71 people on board.

In May, less than 20 minutes after taking off from Pokhara, a Tara Air plane crashed.

At least 309 people have died in plane or helicopter crashes in Nepal since the year 2000. Nepal is home to eight of the 14 highest mountains in the world, including Everest, and the weather can change quickly, making it dangerous to fly there.