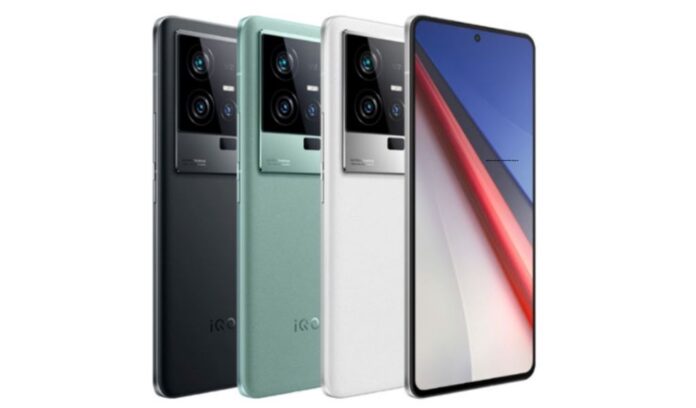 The smartphones made by Vivo’s subsidiary iQOO are known for how well they look and how well they work. The company started this year with the same motto by releasing the iQOO 11, which is India’s first smartphone with a Snapdragon 8 Gen 2 processor. It also has a 144Hz 2K display, 16GB LPDDR5x RAM, and UFS 4.0 storage, among other things. So, yes, you could say that this is the most powerful Android phone in India right now, at least until new phones like the OnePlus 11 and the Xiaomi 13 come out. I’ve been using the Alpha version of the iQOO 11 for more than a week, and here is my full review of iQOO’s latest flagship smartphone.

The iQOO 11 comes in two different versions. The Legend version has BMW M-series branding, and the Alpha version, which is black, has a matte finish with some texture. The black iQOO 11 is made of glass, while the white one is made of fake leather. I’ve been testing the Alpha version, which has little branding and looks like a high-end phone from the back because of its big camera bump and 3D curved finish.

Even though the Alpha iQOO 11 doesn’t show fingerprints, it is very slippery. Even though I didn’t want to, I ended up using the phone with the case that came with it. Just like other phones in this price range, the phone’s frame is made of aluminum. Also, keep in mind that this is a big phone that can’t be used with one hand. Most of the front of the iQOO 11 is taken up by the screen, which is a flat panel with thin bezels on all four sides. Screen protectors are easy to put on a flat screen, but a curved screen would have made this phone feel even more high-end. Overall, the iQOO 11 is a well-built premium-looking smartphone with almost all the bells and whistles that one would expect from a performance-focused flagship smartphone of 2023.

As I’ve said before, the iQOO 11’s design and positioning would have been even better if it had a curved screen. The iQOO 11 has a screen made of the first generation of Corning Gorilla Glass Victus, just like all modern iPhones. The company does give you a soft screen protector with the phone, but I’ve been using it without it. As of right now, there are no scratches that can be seen on the screen. But I would definitely recommend that users put a 2D tempered screen protector on their phone to prevent scratches and other damage over time. 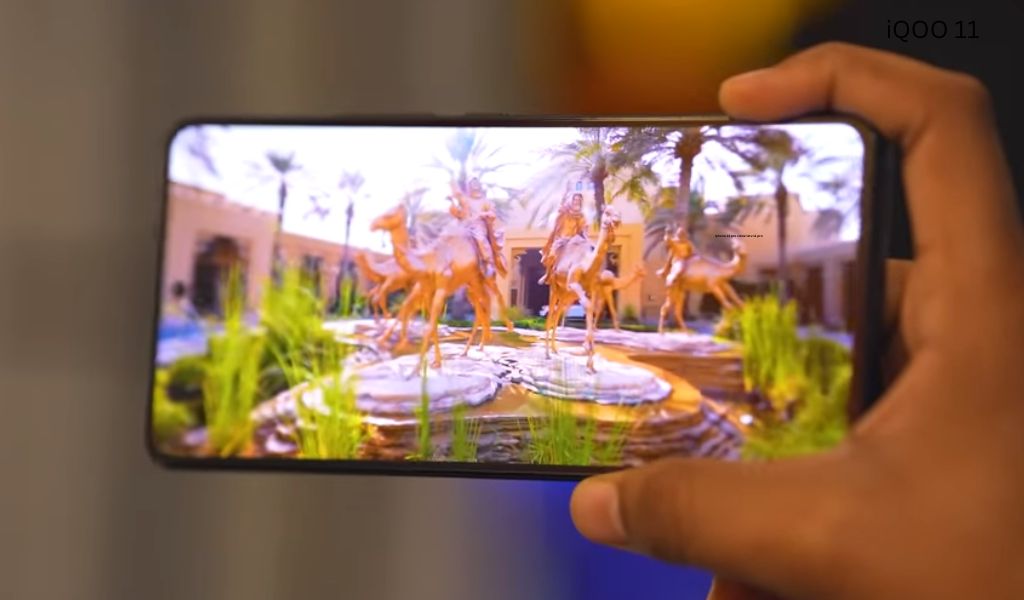 The iQOO 11 has a huge 6.78-inch 10-bit E6 AMOLED screen with a resolution of 1440x3200p, a refresh rate of 144Hz, and a peak brightness of 1800 nits. In terms of specs, this is the most advanced screen on a smartphone right now. It’s also a great display for mobile gamers because it has features like 300Hz touch sampling rate and 1200Hz instant touch.

The colors on the screen are bold and bright, and they are easy to see from outside. Even though the phone can play HDR videos on YouTube, it doesn’t support the Dolby Vision format, which takes a few points away from what would otherwise be a nearly perfect smartphone display.

Whether you’re playing games or watching movies on an OTT platform (1080p content can be streamed on all apps), the content just pops, especially if you turn on the visual enhancement option in the display settings menu. Keep in mind that the display resolution is already set to FHD+ and the refresh rate is set to smart switch. From the settings menu, you can change the resolution to QHD and the refresh rate to 144Hz. Overall, the iQOO 11 has a top-of-the-line display that works well for gamers, consumers, content creators, and the general public. 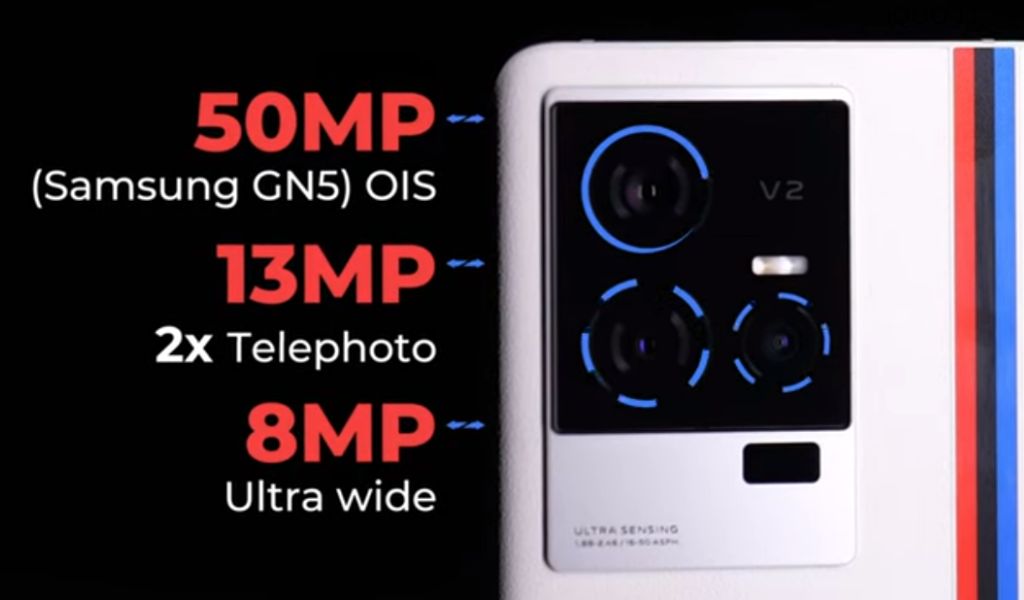 I also liked that there is no shutter lag and the phone takes pictures quickly, which makes it easier to take pictures of things that are moving. With its wide-angle and telephoto lenses, this phone can also take up to 8K videos at up to 30 frames per second. There is also a 16MP front-facing camera that does a good job of taking pictures in most lighting situations. Even though the iQOO 11 may not be the best smartphone camera for this price range, it’s not bad either. With a telephoto lens, it gives you a lot more choices.

This phone is all about performance, and the company calls it the most powerful phone in the world because it has a Snapdragon 8 Gen 2 SoC, 16GB LPDDR5x RAM, and 256GB of UFS 4.0 storage. In our test, the device got 1,24,0651 points on the AnTuTu test. In the same way, the iQOO 11 got 1472 points on Geekbench 5’s single-core CPU test and 4720 points on the multi-core CPU test. Based on these numbers, the iQOO 11 is the most powerful smartphone that has ever been released in India. We can expect phones like the OnePlus 11 and the Samsung Galaxy S23 to have similar performance. 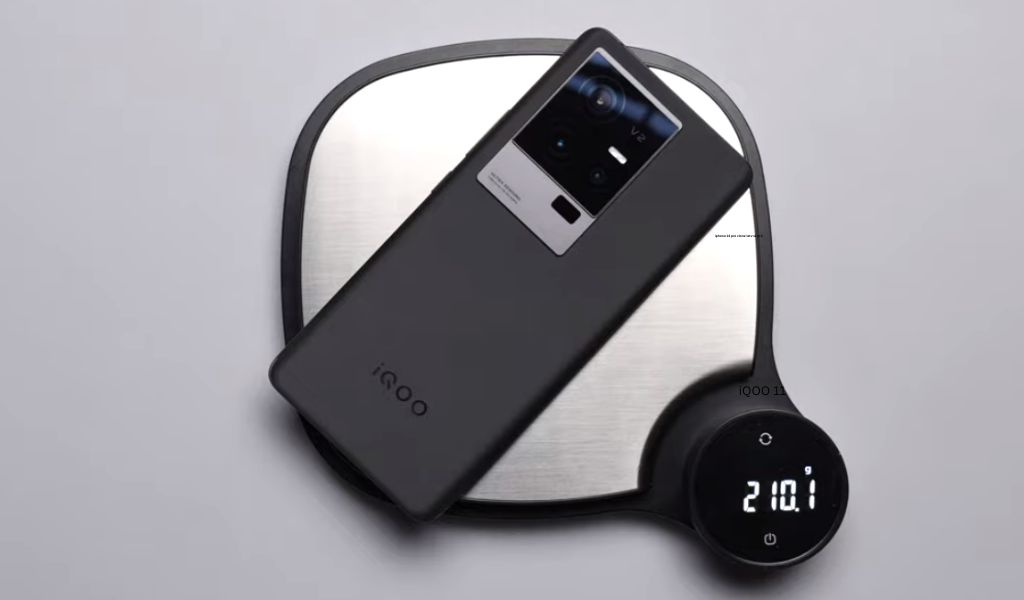 I also did a CPU throttling test, and the iQOO 11 was able to keep 90% of its peak performance for 15 minutes without getting too hot or slowing down because of that. I played games like COD: Mobile for hours with high graphics quality and the maximum frame rate. Even after playing for over an hour straight, I didn’t notice any frame drops. At the moment, there is no Android game that iQOO 11 can’t run, which makes it even better than Android phones that are just for playing games.

The iQOO 11 is likely to continue to be one of the best Android phones this year, both in terms of benchmarks and real-world use. Features like faster LPDDR5x RAM, fast storage, and even a V2 chip for processing images help the device work as well as possible when gaming and switching between tasks.

The iQOO 11 comes with the most up-to-date Android 13 OS and FunTouch OS 13, each of which has its own pros and cons. Even though the software works well and doesn’t lag, I didn’t like that it came with a lot of third-party apps. Some of them are easy to remove, but others, like Browser, V-Store, iManager, and EasyShare, can’t be deleted or turned off.

Even though bloatware might be fine on low-end and mid-range phones, having a lot of third-party apps on a high-end phone like an iQOO 11 is a bad idea. I’ve also missed a few notifications from apps like WhatsApp and Instagram. In some apps, you have to manually turn on notifications.

The iQOO 11 has a big 5,000 mAh battery, and a 120W fast charger that can charge 50% of the battery in just 8 minutes is included in the box. I worry a lot about the battery life, but this device’s 120W fast charging made me feel better about it. If you don’t play games and only use the iQOO 11 for social media, calls, and a little bit of content consumption, the phone can easily last more than a day and give you 7 hours of screen on time, even with the display resolution set to 1440p at 144Hz refresh rate. At the end of the day, gamers who play a lot might need to use the charger.

I used the iQOO 11 on both the Airtel and Jio networks and was able to connect to the 5G network on both. It was easy for the device to connect to both WiFi and Bluetooth devices. But the USB Type-C port can only send and receive data at USB 2.0 speeds, which is a bummer.

As the top model, the iQOO 11 is good at a few things. It has a great screen, a high-quality design, and a powerful processor. In the same way, it has a better-than-average camera, a big battery, and technology that lets it charge quickly. As a high-end device that starts at Rs 59,999, it doesn’t have features like water and dust resistance (IP rating) or wireless charging. But I don’t think these are deal-breakers. Overall, the iQOO 11 is a great smartphone for people who want the latest and most powerful Qualcomm processor in a high-performance phone. Still, you might want to wait and see how other high-end devices do this year before deciding to buy the iQoo.