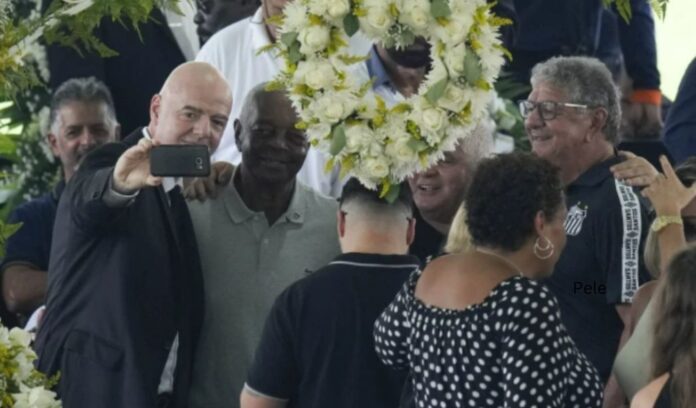 FIFA president Gianni Infantino has been criticized for allegedly taking a selfie next to Pele’s coffin at the legendary footballer’s funeral in Santos, Brazil. People lined up to see Pele’s body, which was in an open casket in the middle of the field at the Vila Belmiro stadium, home of the Santos Football Club. Pele died Thursday at age 82 after a long battle with colon cancer.

Infantino was one of the first people to arrive at the funeral for the legendary football player, who was the only person to win three FIFA World Cup trophies.

Fans were not impressed by Infantino’s selfie, and quite a few criticized the FIFA president’s behavior at Pele’s funeral. People asked why they were posing for photos while hundreds of Brazilians were mourning the death of one of their greatest national heroes.

Infantino pulls out his mobile to take a selfie in front of #Pelé lying in his coffin according to the report below. What a disgrace. https://t.co/g9HCbgPJ6A

And Infantino is going to take a selfie at each one. pic.twitter.com/xNIMbc3FOO

infantine asked all of the members of FIFA to make sure that at least one stadium is named after Pele to honor the legendary soccer player.

“FIFA will definitely give the “king” the respect he deserves. We have asked all 211 football associations around the world to honor Pele with a minute of silence before every game and to name a stadium after him. Pele must be known and remembered by people in the future.”

On Tuesday, a procession carrying Pele’s coffin will move through the streets of Santos. It will end at the Ecumenical Memorial Necropolis cemetery, where he will be buried in a private ceremony.