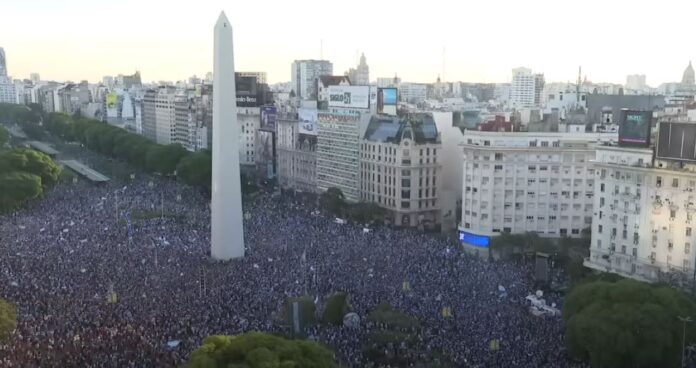 The celebration is just in the air. After narrowly defeating France in the World Cup final, jubilant Argentina supporters are rejoicing all across the world, even at the home of the late, great Diego Maradona.

As he drove Lionel Scaloni’s team to their first FIFA World Cup victory since Maradona led the Albiceleste to victory back in 1986, Lionel Messi stole the show in Qatar. The competition was held a little more than two years after Maradona legend passed away in 2020.

Argentina got the upper hand against France in the first half thanks to goals from Lionel Messi and Angel Di Maria. France had been troubled by a sickness in the run-up to the final and looked lethargic. Didier Deschamps’ team, though, was given a huge boost in the 80th minute when Kylian Mbappe scored twice in the space of 90 seconds to force overtime.

In the 108th minute, Lionel Messi capitalized on a situation and maintained composure to give Argentina the advantage once more. However, Mbappe once more saved the day for France by completing his hat trick from the penalty spot in the 118th minute.

For the third time ever, the FIFA World Cup 2022 final was decided by penalties after the scores were tied, and Argentina won the nail-biting shootout.

Obviously, Messi was the center of attention following Argentina’s victory. The seven-time Ballon d’Or winner knew that, at 35, this was his last chance to win the World Cup after losing the 2014 final, and he was overcome with emotion after the game.

Messi is quoted as saying, “It’s crazy that it occurred this way,” in SPORT. “I really wanted it. I had a sense that this was what God was going to offer me, therefore I knew He would. Enjoy right now.”

The celebrations have started in Buenos Aires, Argentina.

The talisman of Argentina was expected to leave the team after the competition, according to rumors. Prior to the game, Messi announced that Sunday’s game will be his final World Cup contest.

But he claimed that, for the time being, he is ready to continue. He said to TyC Sports, “No, I’m not going to leave the national team. “I want to continue wearing the Argentina jersey and playing as World Cup champions.”

#FIFAWorldCup #Qatar2022 #Dreamers #Argentina after being the World Champion, Argentina Fans #Celebrating ⚽️
Celebrations in the Air 🎉
via ig/vision.mdq pic.twitter.com/HCGmpRW11f

Emiliano Martinez, who stopped Kingsley Coman in the penalty shootout, also contributed heroically to Argentina’s victory. Aurelien Tchouameni, a midfielder for Real Madrid, was also bumped in the head by the Aston Villa goalkeeper, delaying his penalty kick by flinging the ball away. Tchouameni pulled his penalty wide after a lengthy delay, giving Argentina the lead.

“I always have to give that moment to my teammates,” said an emotional Martinez after the shootout. “They kicked me three times again and scored three goals, but then I did everything properly.”