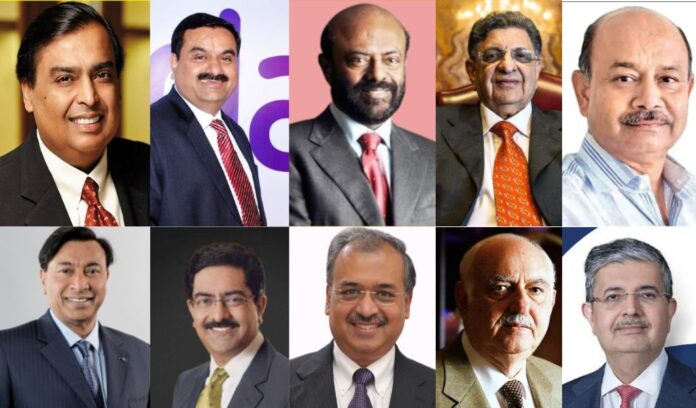 This article now features a list of the top 10 richest men in India in 2023, together with their estimated net worth in both US dollars and Indian rupees. There are a large number of extremely wealthy people living in India, some of whom are included in the list of candidates for the title of Indian Richest Man 2023.

Significant leaps forward in the development of the Indian economy can be attributed to the country’s many self-made billionaires, who hail from a wide variety of industries. There will be fluctuations in wealth as a result of uncertain market conditions. It is especially true when taking into consideration the fact that the majority of billionaires have their wealth invested in publicly listed companies.

Even though the COVID-19 Pandemic was wreaking havoc on the lives of the majority of Indians during this time period, there were still a great number of Indians who were able to drastically improve their financial situation. There will reportedly be 18.5% more billionaires established in the country in the years 2021 to 2022 compared to the previous year, as reported by several sources.

It’s fascinating to learn that four Indians are among the top 100 richest persons in the world. They are Mukesh Ambani, Azim Premji, Shiv Nadar, and Lakshmi Mittal. There were a total of 106 Indians who were able to secure a spot on the Indian Richest Man 2023 list.

We are glad to present Mr. Mukesh Ambani, Chairman of the Reliance Group and the current holder of the title of Wealthiest Person in India. Mr. Mukesh Ambani remains at the very top of the Forbes list as the wealthiest individual who hails from India. In terms of today’s currency, he has a net worth that is equivalent to $90 billion.

Gautam Adani is one of the individuals who has accumulated a billion dollars in wealth in the quickest amount of time among those living in India. He is well-known for maintaining close ties with powerful political individuals, which has earned him a good reputation. It is estimated that he has a worth of $90 billion, which places him as the second-wealthiest person in the annals of Indian history. This multibillion-dollar corporation has its hands in a number of different fields of business.

As a result of his participation in the establishment of HCL Technologies, he is now the owner of personal wealth that is valued at $28.7 billion U.S. dollars. Nadar is the Chairman of HCL, which is India’s fourth-largest software services corporation. HCL was founded in 1981. HCL’s sales are 11.2 billion USD. The Shiv Nadar Foundation is led by the philanthropist Shiv Nadar, and its mission is to lend financial assistance to groups that are seeking to expand students’ access to better educational possibilities.

Cyrus Poonawalla is widely regarded as one of the most successful manufacturers of vaccines in the world. Approximately 1.5 billion vaccine doses are produced each year at the Serum Institute in India, according to recent sources. Vaccines like these offer protection against contagious diseases like polio, measles, and influenza. As a direct consequence of his accomplishments, Cyrus Poonawalla has earned the position of fourth on the list of the richest persons in India in 2023, and his current net worth is $24.3 billion.

On the list of the wealthiest people in India, the number five slot is held by an investor by the name of Radhakishan Damani. In the year 2022, he has a net worth of 20 billion United States dollars and is ranked number 78 on the list of the world’s billionaires. Damani is a well-known investor in Mumbai. He has ownership in a wide range of businesses, some of which include the Radisson Blu Resort in Alibaug, VST industries (which is a manufacturer of tobacco products), United Breweries (which is a producer of beer), and a great number of other companies.

Lakshmi Mittal, a business magnate in the steel industry, is the fourth wealthiest man in India and possesses a net worth of $17.9 billion US dollars. Because of his achievements in the steel sector, Mittal is well-known all over the world.

He comes in at number 89 on the list that was prepared of those who are worth a billion dollars. It came into being in 2006 as a result of the merger of Mittal’s previous company, Mittal Steels, and Arcelor (of France). It rocketed Mittal to the head of the pack in the competitive world of business. This project is being headed up by Lakshmi Mittal in her capacity as a leader.

The Aditya Birla Group, which is managed by Kumar Mangalam Birla, is involved in operations across 14 distinct business sectors and generates revenue of $44.3 billion in the United States. The corporation is the owner of a number of well-known brands, including Allen Solly, Van Heusen, Pantaloons, and Ultra Tech cement, amongst others. In addition, the group was able to successfully complete the merger of Idea Cellular and Vodafone India in August of 2018, thereby creating the most successful and well-known telecom company in India.

The fourth major manufacturer of specialized generic pharmaceuticals is a company called Sun Pharma. Dilip Shanghvi is the original creator of the company. He is now ranked 115th on the list of the world’s wealthiest people, with an estimated wealth of 15.6 billion United States dollars. The pharmaceutical company that is the most valuable one in India had sales of $4.5 billion in March 2021, and the owner of such a company is the seventh wealthiest man in India at the present time.

The large building and construction business is managed by the Shapoorji Pallonji Group, which has its headquarters in Mumbai and is ranked tenth on the list of the wealthiest persons in India. He is ranked 125th in the world with a total wealth of US $15.7 billion, which places him as the 9th richest person in India. The SPG group is a fairly varied company, and its name is associated with the brands of 18 well-known businesses.

Uday Kotak is now serving as both the executive vice-chairman and managing director of Kotak Mahindra Bank, a financial institution that has a market value of a total of $14.3 billion. On the list of the richest persons in the world, he comes in at position 129, and on the list of the richest individuals in India, he occupies the tenth spot. Following the successful completion of the acquisition of ING Bank’s Indian business in 2014, Kotak Mahindra Bank is now ranked as one of the top four private sector banks in India.