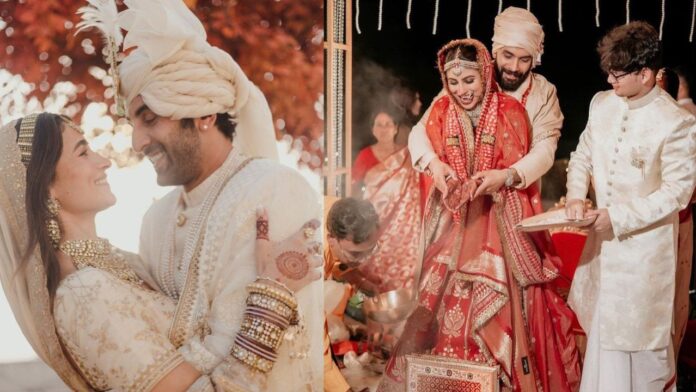 The amount of fantastic Bollywood weddings 2022 is one of the most notable things that comes up. Some of these celebrity weddings were anticipated and that came as a surprise to the most Bollywood fans. Social media feeds were swamped with photos of joyful couples in enormous fat designer wedding gowns. Every single one of those looked stunning!

Here is the list of Bollywood weddings 2022 that made headlines:

This year began with the wedding of TV’s ‘Devon Ke Dev, Mahadev’ alias Mohit Raina, who was also in the war-action thriller Uri: The Surgical Strike. They met through mutual friends, and it was Mohit who initiated the romance. “Love recognises no limits, it jumps hurdles, leaps fences, penetrates walls to arrive at its objective, full of hope . With that hope and our parents’ blessings, we are no longer two but one. “I need all of your love and blessing on this new path,” he wrote on Instagram.

Mouni Roy, who was last seen in Brahmastra, married Suraj Nambiar, a businessman from Dubai, in a three-day ceremony. The pair married in both South Indian and Bengali traditions. “I finally found him. We are married, hand in hand, with the blessings of family and friends. I need your love and blessings,” she wrote on social media. The internet was swamped with beautiful photos of the newlyweds.

Karishma Tanna married her long-time boyfriend, Mumbai-based businessman Varun Bangera, earlier this year. They checked all the boxes, from carefully color-coordinated bridal clothes in similar pink tones to professional photographs of various wedding moments. Karisma, who had always desired “a tiny yet fancy wedding,” held a small gathering of less than 100 people.

Vikrant Massey, an actor known for his performances in films as well as OTT, picked February 14, Valentine’s Day, as the perfect, unforgettable date to marry his lady love, actress Sheetal Thakur. The bride’s ancestral house in Shahtalai, Himachal Pradesh, hosted a private wedding with everything traditional, organic, and eco-friendly.

Shibani Dandekar and Farhan Akhtar married in February in front of intimate friends and family members. Dandekar’s unconventional wedding attire made media headlines. Her followers received the news very well. Hrithik Roshan and Akhar dancing on a Senorita from Zindagi Na Milegi Dobara got popular in one of the videos.

Sanah Kapoor and Mayank Pahwa married in a small ceremony on March 2. Their followers were thrilled by their low-key Bollywood weddings 2022, minimalist appearance, and Hum Saath Saath Hain wedding photographs. It was a welcome change from royal and Bollywood celebrity weddings.

The wedding of Alia Bhatt and Ranbir Kapoor was the most anticipated event of Bollywood weddings 2022. In April, they married in front of family and close friends at their house. Beautiful celebrities such as Karisma Kapoor, Kareena Kapoor, Saif Ali Khan, Riddhima Sahni, and others attended. Bhatt wore a Sabyasachi saree with her hair open. This Bollywood weddings 2022 made headlines in media.

Nayanthara and Vignesh Shivan, both actors, married in June. Netflix even covered the wedding. Beyond The Fairytale is the title of the documentary. Nayanthara walked in wearing a gorgeous crimson saree with a trail, while Shivan wore traditional clothing. Rajnikanth and Shah Rukh Khan were among the celebrities who attended.

Richa Chadha and Ali Fazal married in October, and their wedding attire made headlines. The duo wearing Abu Jani and Sandeep Khosla ensembled in one of the photos. For one of the parties, Fazal wore an angrakha kurta, which we thought looked great on him.

Hansika Motwani and Sohael Kathuriya married recently in Jaipur. Motwani looked stunning in an embroidered red lehenga with elaborate detailing. Haldi, an all-themed party, and a Sufi night were among their pre-wedding activities and decoration.

Arjun Kanungo met his now-wife Carla Dennis Kanungo on the sets of his first music video, in which the model-content creator acted as the leading lady. “For both of us, it was love at first sight. “We were together for seven years before deciding to marry,” Arjun explains. Their love tale was like something out of a romantic comedy.