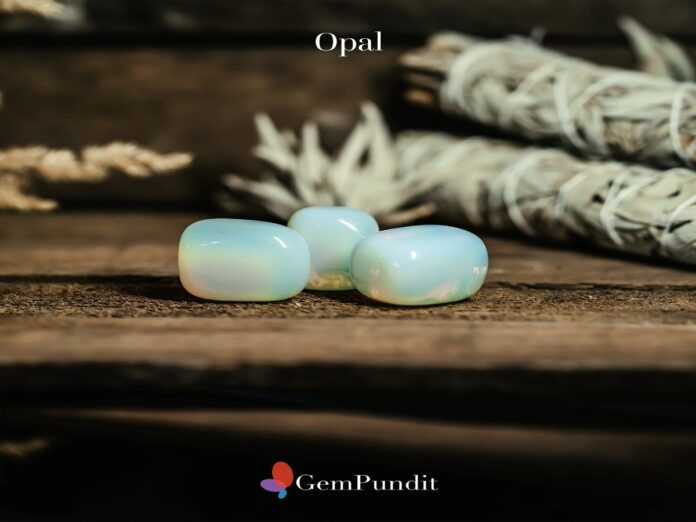 Opal is one of the most beautiful and intriguing gemstones on Earth. It comes in a huge variety of colours, including reds, purples, greens, blues and even white. It has an iridescent play-of-colour effect that makes it seem like it’s glowing from within.

Contents hide
1 The Mysterious Birth of Opal
2 Opals Are Called “The Queen of Gemstones”
3 Australia Produces Majority of Opals in the World
4 What Makes Opal So Popular?

Opal has been prized for thousands of years in many cultures and civilizations of the world. It’s hard to believe that there are still some secrets about Opal Jewelry that most people don’t know. Here are 3 opal gemstone secrets you never knew:

The Mysterious Birth of Opal

The birth of opal is a little-known fact that is fascinating. The stone is formed from silica gel in the ground and becomes solid when the water dries up. Opal is a secondary mineral that forms in the spaces between other rocks. It’s usually found in volcanic or sedimentary rock deposits and can be formed by heat and pressure on other minerals or organic material. When it forms, it can take on many different colours and patterns.

Opal has been around for millions of years, but its origin is still unknown. Some experts believe that it formed in ancient oceans, while others think that it was created when lightning strikes hit the earth. Others still say that opals were created by volcanoes.

In the first century, Pliny wrote that opals resembled volcanoes and paintings made with multiple hues. For centuries, opal gemstones have been shrouded in legends. During the Middle Ages, it was thought that wearing an opal would bring luck to its wearer.

After Australia rediscovered opal in the 1850s and began mining it with a vengeance, it became known worldwide for its vast supply of opals and high-quality stones. In the decades since then, opal gemstones have become more popular. The recent discoveries in Ethiopia—especially those from Shewa Province were dark and tended to crack easily but the discovery of deposits in the Wollo Province brought vivid play-of-colour stones to markets.

Opals Are Called “The Queen of Gemstones”

Because of their unique appearance and play of colour, opals are known as the “Queen of Gemstones.” They have been treasured for thousands of years and have been worn by royalty throughout history. The play-of-colour occurs when light passes through an opal and reflects off of the tiny silica spheres within the stone. Depending on the size, shape and colour of these spheres, they can create vivid rainbow flashes of colour that move as you turn the stone.

The colour play can occur in many different patterns, from solid flashes to delicate hues that resemble a painting. In 75 AD, the Roman philosopher Pliny the Elder wrote a book called “Natural History” in which he described opals as “a stone of many colours, resembling the rainbow.”

Romans believed the stone had magical powers and could protect its wearer from harm. They believed that wearing an opal would prevent you from being poisoned or attacked by wild animals. This belief continued for hundreds of years, and it wasn’t until the 19th century that gemologists discovered that opal is not a stone but an amorphous form of silica.

Australia Produces Majority of Opals in the World

Australia produces 95% of the world’s opals, and the majority of them come from a town called Coober Pedy in South Australia. The formation of the Great Artesian Basin began about 140 million years ago when vast, inland seas covered most of central Australia. These seas eventually receded and left behind a vast expanse of an underground aquifer that has been filled with water ever since—creating what is now known as the Great Artesian Basin. The opal fields exist within and beyond this basin.

In 1889, Tullie Cornthwaite Wollaston travelled to London with 60 beautiful samples of opal that had been mined in Queensland. Though rejected initially, Wollaston was able to successfully introduce the Australian opal industry to the world.

The majority of black opal with a dark grey to blue-black background is mined in Lightning Ridge, New South Wales and Mintabie, South Australia. Some varieties also come from Coober Pedy, South Australia, a mine known for stunning white opals. Boulder opal is found in several parts of Queensland and Andamooka.

What Makes Opal So Popular?

Opal is a beautiful gemstone that has been treasured for centuries. It is also quite affordable, durable, and easy to care for. Opal can be worn every day without worry about scratching or chipping because of its hardness (5.5 – 6 on the Mohs scale). Opal is also the birthstone for October and is thought to bring good luck.

When looking to buy an opal gemstone, you should consider a few factors. The colour of the opal is an important factor when considering a stone, but the cut and clarity are equally as important. A clean, well-cut stone with a high degree of fire will have better play-of-colour than one that has been poorly cut or has flaws in the surface.

Ask the seller to provide a free lab certificate to verify the opal’s authenticity and make sure that it has not been treated.