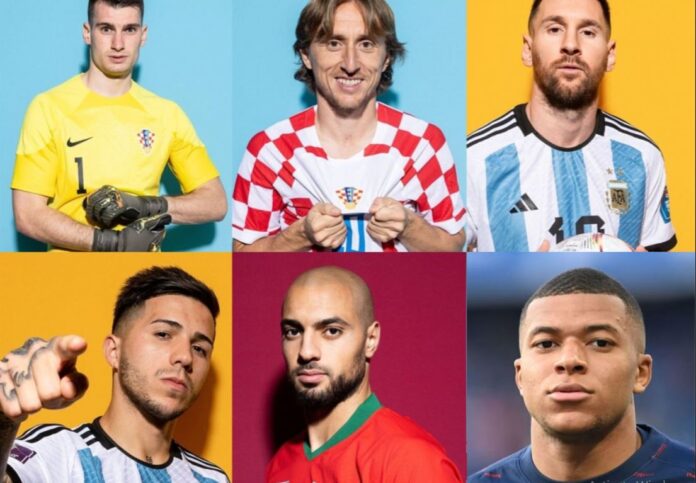 The Greatest Show on Earth is over after a month of drama, victory, tears, and ecstasies. Some of the best players in the world performed admirably, while others had to leave the game early and individuals who weren’t even close to being considered made headlines.

It’s challenging to pick just 11 players from among the many exceptional performers will be lengthy because many players will vie for a single slot. When a major tournament is over, Editorialge try to follow their lead.

The goalkeeper Dinamo Zagreb was likely Croatia’s most significant player at the World Cup 2022 in Qatar, as they finished third. In the knockout stage, he was the winner of not one but two penalty shootouts. No one in the competition made more saves than Livakovic, and he consistently delivered when his team needed him to step up.

If Lucas Hernandez’s injury hadn’t occurred, Theo Hernandez might not have played a significant role in the World Cup. He helped France advance to the World Cup final with his goal against a persistent Morocco in the semifinal. Hernandez, who was positioned down the left side of the field behind Kylian Mbappe, gave them a boost offensively during the group stage with two assists. He occasionally erred on defense, yet he excelled for France in crucial situations.

At the World Cup championships in Qatar, the 37-year-old received his 162nd cap on Saturday as Zlatko Dalic’s team defeated Morocco 2-1 at Khalifa International Stadium to claim third place. This accomplishment, which comes four years after Croatia made it to the 2018 final, demonstrates Modric’s durability in the center of Croatia’s midfield. The Real Madrid player merely said he would play through the Nations League finals in June before weighing his options.

Achraf Hakimi, who is typically known as an attacking fullback, demonstrated the other side of his abilities during the World Cup. In the defensive third, he led in total tackles and positions won while defending against the best attackers in the world. Hakimi is among the top five for interceptions and made a substantial number of recoveries.

Sofyan Amrabat entered the World Cup as an unknown, but he gained popularity with each match and emerged as one of Morocco’s top performers. To say that he was among the finest midfielders during the World Cup is not an exaggeration. Amrabat was the player who made the most recoveries, and his confident defense of Kylian Mbappe was one of the best examples of Morocco’s defensive prowess.

Enzo Fernandez’s addition to the Argentine midfield was a brilliant move, since he had an immediate influence in the crucial encounter against Mexico. Since scoring that crucial goal that kept Argentina in the competition and helped him earn a penalty against Croatia, the Benfica forward hasn’t looked back. He is a “great talent,” according to Lionel Messi, and in the near future, the major European clubs are expected to spend a fortune on him.

In his final World Cup, Luka Modric, 37, put on yet another outstanding display. Croatia’s Modric was excellent in the middle of the field throughout the competition, and he also performed admirably in the semifinal defeat to Argentina. Before being replaced in the 81st minute, Modric appeared to have Croatia’s best chance to accomplish something remarkable. But it was admirable how he used his brilliance to bring fluidity to the game and manage it.

When France last won the World Cup, Griezmann was fantastic, but few anticipated that he would also be this good this time around. He has undoubtedly been the best France player in this season, and numerous times throughout the match, he was in the right place at the right moment. He has served as the team’s foundation and the heart of the midfield, and the three assists he has received to date attest to his contributions on the field.

Once again, Kylian Mbappe’s lightning-quick speed, lethal accuracy, and electrifying presence lit up the World Cup. Mbappe generated opportunities by making critical openings, even when he wasn’t scoring goals. The Frenchman seemed to be clung to by the opposition’s defenders, yet he managed to contribute significantly during the World Cup, just as he did during the 2018 campaign.

The highly respected Argentine attacker will be hoping to play football in England and bring home several titles. The current approach in the Premier League is to weave numerous webs that ensnare rival defenders and allow the reigning champions to take home more hardware. Another factor contributing to the alleviation of some City supporters’ concerns following Sergio Aguero’s departure is the 22-year-old Alvarez. Their attention was further heightened by his impressive contributions to his country’s World Cup run.

Throughout the competition, Lionel Messi shattered record after record. He became assist provider, scored in every knockout game, and was undoubtedly the best player in the competition. Prior to the final, no one had more shots on target than he did, and they were all perfectly timed hits. Most impressively, he was still on the field for the entirety of Argentina’s World Cup run at the age of 35.

Morocco hired a coach with little outside of the country’s own league structure just over two months before the 2022 FIFA World Cup began. Walid Regragui was on his way to become one of the most inexperienced team captains to ever manage a team at a World Cup after taking over for Bosnian Vahid Halilhodzic.

As a point of reference, Regragui started managing clubs about the same time as Louis van Gaal was wrapping up his second stint as the Netherlands’ head coach. The risky move worked out. Through victories over Belgium, the elimination of Spain and Portugal, and a good showing in a semifinal loss to France, Morocco became the first African team to advance to the semifinals.