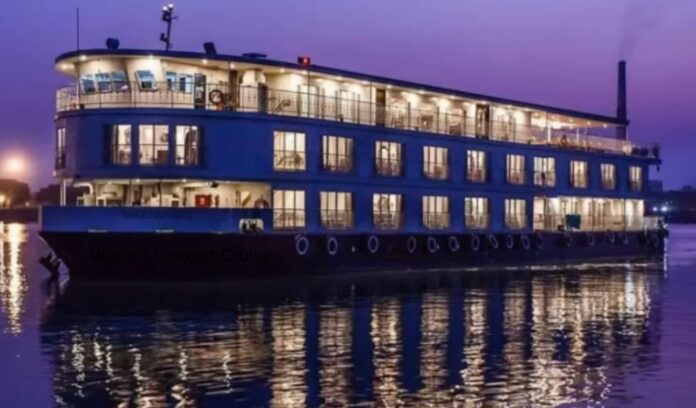 On January 13, Indian Prime Minister Narendra Modi will launch the world’s longest river cruise, Ganga Vilas, from Varanasi in Uttar Pradesh to Dibrugarh in Assam via Bangladesh, according to the Times of India.

The entire journey will take around 50 days, spanning 27 river systems in India, including the Ganga-Bhagirathi-Hooghly, Brahmaputra, and West Coast Canal. According to reports, the ship will traverse 1,100 kilometers through Bangladesh.

According to the Times of India, the cruise will visit 50 key tourist destinations, as well as heritage sites such as the iconic Ganga Aarti in Varanasi and sanctuaries such as Kaziranga National Park and the Sundarbans Delta.

Earlier, Sarbananda Sonowal, India’s Minister of Ports, Shipping, and Waterways, stated that the cruise will take guests from Varanasi to Dibrugarh via Bangladesh, traversing 4,000 kilometers on the rivers Ganga and Brahmaputra.

The world’s longest river cruise will commence its journey in Jan next year. Ganga Vilas, will set sail from sacred Varanasi to Dibrugarh via Bangladesh covering 4,000 km on the two greatest rivers of India, Ganga & Brahmaputra. Watch 🎥 pic.twitter.com/1buzy8ISig

Ganga Vilas is a luxury river cruise ship with 18 suites and all the other amenities, according to the official website. It can hold up to 80 people.

The website says, “This cruise was built with a unique design and a vision for the future. It will stop at a number of famous places along Kolkata’s River Hooghly and Varanasi’s River Ganges.”

According to a schedule that came out earlier, the Ganga Vilas Cruise will leave from Varanasi and arrive in Patna on the eighth day, after stopping in Buxar, Ramnagar, and Ghazipur.

From Patna, the cruise will head to Kolkata. After stopping in Farakka and Murshidabad, it will arrive in Kolkata on the 20th day.

The next day, it will start heading toward Dhaka and cross into Bangladesh. For the next 15 days, it will stay in the country’s waters.

Lastly, it will go back to India through Guwahati, sail through Sibsagar, and arrive at Dibrugarh, which is its final destination.