Do you want to know about Huggy Wuggy? You may have seen that there are more and more articles about the character Huggy Wuggy from the horror survival game Poppy Playtime. Similar to the Momo Challenge stories, this is usually accompanied by a scary blue character with red lips and sharp teeth and warnings about how it will upset or hurt children.

But no evidence that points back to the PC game itself has been found. Instead, warnings from head teachers and the police have led to false information about what the game is about and how it might affect kids. Most of the worry is about game-related videos on TikTok and YouTube that show game characters in scary situations. One of these videos had a song called “Free Hugs,” which said, “I could just hug you right here. Forever, forever. Until the last breath you take.”

If you’re a parent or guardian and you’re worried about this. You should learn about the game and Huggy Wuggy before you delete it from your kids’ devices. Instead of making a quick decision. This is a chance to talk with your child about the content and then make a decision together.

Who is Huggy Wuggy?

Poppy Playtime is a scary PC game where the main character, who doesn’t have a name, looks into a mystery in an abandoned toy factory. As the player, you can go anywhere in the factory and pick up VHS tapes to figure out what happened. You have to solve puzzles while avoiding the “vengeful toys” that were left behind.

“Huggy Wuggy” is one of the most well-known characters in the game and one of the most disturbing to look at. It’s a big, scary blue monster with bulging eyes, wide red lips, and long limbs that actively follows you around as you try to finish the game. He comes out of nowhere in the dark to try to catch you. If you get caught, Huggy Wuggy will give you a wide, evil smile and eat you.

Playtime CO. made Huggy Wuggy so that kids could love him. Soon, the toy was the most popular thing the company made, but at some point before the events of the game, he was changed by giving a corrupted human conscience. This made him a monster.

When he first showed up, he pretended to be a statue to trick the main character. Huggy Wuggy leaves his pedestal as soon as the main character gets the key and turns the power back on in a room that needs that key. From then on, he follows the player from vents or high places they can’t reach. It won’t come out of the shadows and chase the player in the conveyor belt tunnels until they run into the dark. Every time the player doesn’t make it to the catwalk at the end of the belt, Huggy Wuggy grabs them with its teeth and kills them.

If the player does make it to the catwalk, they must pull a box in front of the creature to block it and kill it, making both of them fall. When the player makes it through, Huggy Wuggy falls into the void after hitting some pipes and leaving a bloody mark. We don’t know if it lived or died because of this.

Where are Kids Getting Exposed to Huggy Wuggy?

Deal Parochial Primary School in the U.K. recently sent a letter home to parents telling them that kids were offering to hug classmates and whispering rude things in their ears.

How do children even know about Huggy Wuggy? Even if your child is in elementary school, he or she might not be able to play Poppy Playtime. But kids still see videos of the monster-bear hybrid on YouTube and TikTok. YouTube has settings for parents, but Deal Parochial Primary School worries that the videos aren’t being filtered because the name “Huggy Wuggy” is cute.

But the videos aren’t funny. Some show TikTokers making fan art while fan parody songs play in the background. Some show scary pictures, like Huggy Wuggy running toward the camera with his teeth that look like knives.

Is There a Deeper Reason for Huggy Wuggy’s Popularity?

The horror movie genre itself could be another reason. There’s a reason why scary games are so popular. They’re fun and give players a little rush of adrenaline, as well as a sense of relief when they fail and don’t die, or when they get through a scary scene without getting hurt. This is shown by games like Poppy Playtime and Five Nights at Freddy’s. Sometimes it’s just fun to be scared, and the monsters in horror games have fans just like any other characters do.

There could even be a deeper psychological reason for how popular Huggy Wuggy is. Horror games can be a form of catharsis that is almost therapeutic, and this could be true for both kids and adults. Making up monsters can make scary things less scary in real life. Real phobias include a fear of heights or of creepy crawlies like spiders. Fictional scares can help lessen the effects of real ones.

This could also be why sales of things like plushies are going through the roof. When kids play with a toy version of a scary monster, they can interact with it on their own terms, which makes the monster feel less scary. This makes fears that are too real feel even less scary. At the end of the day, Poppy Playtime might not be safe for kids, but it and other scary games might be good for some people. Huggy Wuggy’s popularity could have more to do with the people who play it than meets the eye.

Why are People Concerned about Huggy Wuggy? 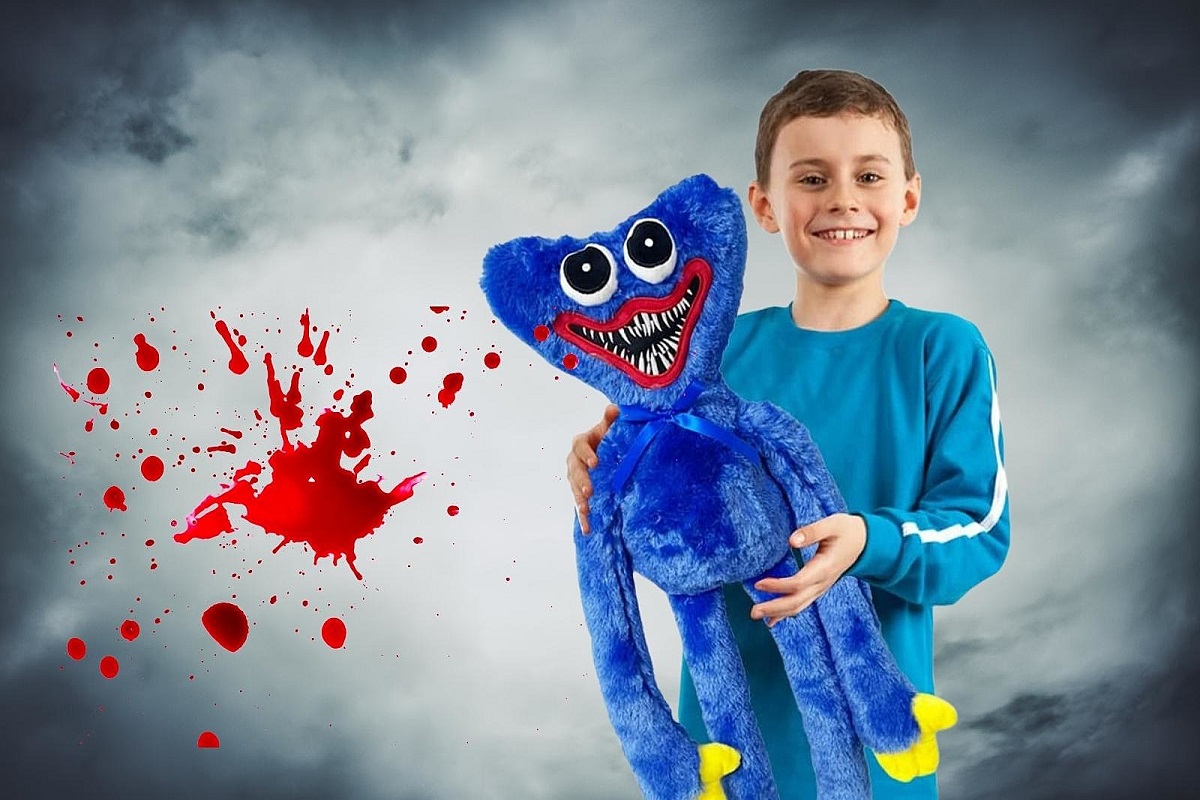 The Deal Parochial Primary School said that the videos were making kids sad. Common Sense Media cautions parents, “Even though there isn’t any graphic violence or gore, there is blood all over the factory. Also, the game’s horror theme is probably too scary for younger players.”

Huggy Wuggy isn’t just in videos like “Squid Game,” but it’s also on the playground. In a letter to parents, the head of Deal Parochial Primary School, Justine Brown, said, “It is a very deceptive character because hugs should be seen as something kind and loving.”

Parents and professionals can help children more by teaching them how to behave online than by telling them about specific dangers like Momo or Huggy Wuggy.

Children can do well if there is an atmosphere of openness and honesty about what they do online. If you see them switching screens on their phones when you walk up to them. Or new phone numbers or email addresses on their phones. It might be a good idea to check in with them.

Don’t let people play video games or watch YouTube in family rooms. In video games, you can also put limits on what your friends can do and how you can access user-made content. Which may include add-ons with a Poppy Playtime theme. Also, make sure that your child’s account is in Restricted mode so that they can’t see this content.

Is Huggy Wuggy appropriate for kids?

Parents, the police, and people who work to keep kids safe are worried about a horror game character from “Poppy Playtime” named “Huggy Wuggy.” WARNING: This may be upsetting to some people because of the images and details it has. This is not something that should be shown to young children.

What exactly is Huggy Wuggy?

Experiment-1170, also known as Huggy Wuggy, is the main bad guy in Chapter 1: A Tight Squeeze of the 2021 horror video game Poppy Playtime. In Chapter 2: Fly in a Web, Huggy Wuggy is mentioned as maybe a posthumous bad guy.

Why is It so popular?

One reason why Huggy Wuggy is so popular is that kids and adults don’t always use the word “scary” in the same way. Some people might think that having many rows of razor-sharp teeth is cool instead of scary. Some of the most well-known mascots are Mickey Mouse and Chuck E.

Why are police warning parents about the game?

Officials all over the country have been warning people about Huggy Wuggy. They say that Huggy Wuggy encourages children to hurt themselves and others, and shows children how to hug someone until “they can’t breathe”. And makes children think that toys or objects are trying to hurt them.

What happens when Huggy Wuggy catches you?

He comes out of nowhere in the dark to try to catch you. If you get caught, Huggy Wuggy will give you a wide, evil smile and eat you.

Is Huggy Wuggy a robot or a human?

Even though Huggy Wuggy seems to be a robot. The fact that he has more than one mouth that bleeds when he falls. And has saliva in his mouth when he kills the former employee are all strong signs that he is actually alive.

Is Huggy Wuggy evil or good?

The bad guy in the video game Poppy Playtime is named Huggy Wuggy. Even the name, “Poppy Playtime,” sounds harmless, like a game for kids. But that’s exactly the problem. It’s not a good thing. It’s not what it seems to be, and it could hurt children’s feelings.

Where are kids finding Huggy Wuggy?

Parents.com says that kids might be able to play the game or see the videos on YouTube or TikTok. They say that because the name sounds so cute, some parental controls might have trouble filtering it.

But most scary and violent content with Huggy Wuggy isn’t meant for kids, since the character was originally made to scare adults. The creators of Poppy’s Playtime couldn’t have known that Huggy Wuggy would become popular. With young children and then spread online.