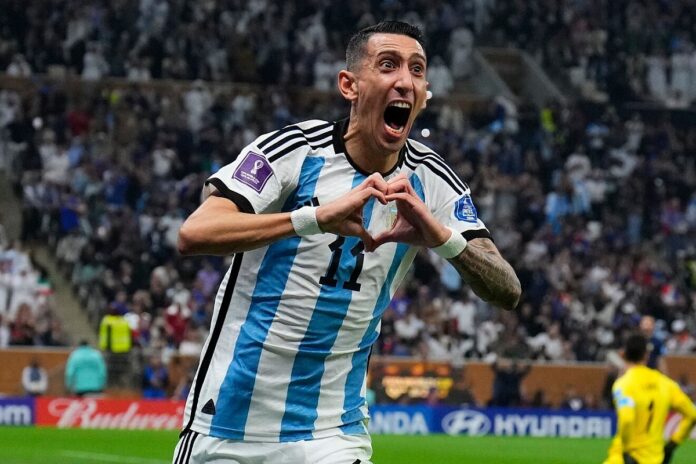 Share
Facebook
Twitter
ReddIt
Pinterest
Tumblr
Linkedin
WhatsApp
Copy URL
Email
Listen to Podcast:
Angel Di Maria was back on the big stage when he scored Argentina’s second goal against France in the FIFA World Cup final. Leandro Paredes, a midfielder for Juventus, didn’t play, so Leandro Di Maria got a chance to play for Argentina. He hadn’t done so in the last three games. The experienced winger joined Lionel Messi and Julian Alvarez in a three-man attack.
Lionel Messi, who is the captain of La Albiceleste, scored a goal from the penalty spot in the 23rd minute of the game. This gave La Albiceleste the lead early in the game.
In the 36th minute, Di Maria scored a goal that gave the South American giants a two-goal lead. Messi flicked the ball to Julian Alvarez, who passed it to Alexis Mac Allister on the right. Mac Allister ran away with the ball and passed it to Di Maria in front of the goal as Jules Kunde and Aurelien Tchouameni worked hard to catch up.

Great Playmaker Angel Di Maria, a star for both Juventus and Argentina, played well against France on Sunday and scored for Argentina in their third straight Final. This has led to almost 1 million tweets praising him.
El Fideo has been hurt a lot this season, but he had one of the best games of his career yesterday. He helped the South Americans win their third FIFA World Cup, the first since Diego Maradona in 1986.
The experienced winger scored Argentina’s second goal against Les Blues, and many people thought the game was over after only 40 minutes. Still, Kylian Mbappé scored twice in less than a minute in the second half, which probably made the Qatar 2022 Final the most exciting game ever.

Great Playmaker Angel Di Maria has won the U20 World Cup, the Olympics, Copa America, the Finalissima match against Italy, and the World Cup. An amazing album that has shocked hundreds of thousands of fans all over the world. The fact that the 34-year-old scored in three straight Finals for his national team makes his accomplishments even more impressive.
The Juventus winger has been called “legendary” and “made for the big stage” in almost 1 million tweets. Here are some of the best El Fideo posts.

Di Maria is the man for the big occasion 👏

Angel Di Mara is a professional football player from Argentina. He plays as a winger and an attacking midfielder for both the Argentine national team and “Paris Saint-Germain.” Angel was born and raised in Rosario, Argentina. He was part of a poor family. As a child, he was very interested in football, but his parents couldn’t afford to buy him football boots or even a football. He joined his first football club, “Rosario Central,” when he was 4 years old. In 2007, he joined the European club “Benfica” and got a huge signing bonus. He bought a house right away for his parents.

In 2010, he joined the popular football team “Real Madrid,” and he was a big reason why the team won “La Liga” in 2011–12. His team won the “UEFA Champions League” with his help. He moved to “Manchester United” in 2014. In 2015, he finally joined “Paris Saint-Germain” after a year with them. He scored the last goal at the “Olympics” in 2008, which helped his country win a gold medal.